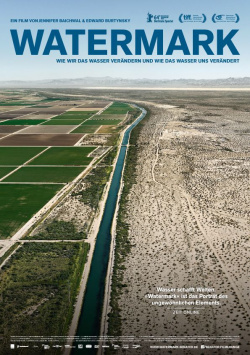 Water is Life! Water can make plants grow, it is an important source of energy, and it provides a habitat for many animals. Water is often the stuff of dreams - but it can also become a nightmare. For water also has an enormous destructive power, as storm surges and floods impressively prove time and again. No matter how hard man tries to master this element with dikes, river straightening or dams, he will never really succeed. In their visually stunning documentary Watermark, Jennifer Baichwal and Edward Burtynsky attempt to show how important water is not only for people, how much the element shapes landscapes and how much man's influence can affect them.

In doing so, they take a rather unusual approach. They have shot a total of twenty short films around the theme of water in ten countries around the globe, which they have assembled into an impressive, but at times also very depressing collage. Las Vegas, the Xiolangdi Dam in China, the Colorado River Delta in Mexico, the Dhaka Tannery in Bangladesh, the headwaters of the Stikine River in Canada or Discovery Bay in the USA were among the locations where a total of 199 hours of material were filmed between 2010 and 2013. From this, the filmmakers have filtered out the essence, which in many moments manages entirely without words. There are also accompanying or explanatory interviews, but it is primarily the images that speak their very powerful language.

It may not be particularly subtle when images of water masses created by dams are juxtaposed with those of a dried-up riverbed. But the images are certainly impressive. The flight over the Colorado River delta, the somewhat eerie-looking large construction site of a dam, the aerial shots of the fields on the Ogallala Aquifier in Texas or the work in the National Ice Core Laboratory - all this is fascinating and depressing at the same time. Because time and again it becomes clear how valuable and important the element of water is for life on our planet and what damage humans inflict through their intervention here. Las Vegas is a good example. The water games that are shown here look beautiful, especially in the great slow motion shots. But actually the water used here would be needed elsewhere much more urgently than just for pure amusement of the tourists.

Watermark makes his point very quickly. The images also make clear relatively quickly the fact that this is a global issue that truly affects everyone. As a result, some of the later posts feel a little repetitive. Of course, in some ways it's effective when shots of the Kumbh Mela festival in India, which only happens every twelve years, where people wash themselves clean of their sins in Allahabad are juxtaposed with shots of the US Surf Open, or when aerial shots show the luxury swimming pools in man-made waterfront housing developments in California. But the great impact this very unusual documentary still has at the beginning diminishes noticeably towards the end.

Despite this: the great images alone, whether aerial shots or images in slow motion or time-lapse, make a visit to the cinema worthwhile. For although they can still impress on a smaller screen, they can only develop their full power on the big screen. A successful testimony about the importance of water for humans and vice versa, which can be warmly recommended to lovers of visually powerful documentaries. Worth seeing

Cinema trailer for the movie "Watermark (Kanada 2013)"
Loading the player ...