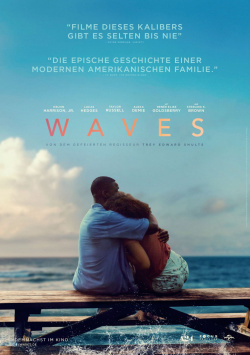 For 17-year-old Tyler (Kelvin Harrison, Jr.), a budding high school wrestling star, the future looks extremely bright. Driven by his father Ronald (Sterling K. Brown), Tyler creates true bests, but secretly suffers from being denied to make his own way. When his relationship with his girlfriend Alexis (Alexa Demie) falls apart, it catapults the boy into a spiral of self-destruction - with disastrous consequences. Among them is his sister Emily (Taylor Russell), who has always had to live her life in her big brother's shadow. When she meets Tyler's wrestling teammate Luke (Lucas Hedges), she falls in love with him almost instantly. For the first time, she feels truly loved and understood. But is that enough to step out of Tyler's shadow and finally blossom?

Waves by Trey Edward Shults is actually a really interesting and engaging film. Stylistically, the filmmaker takes an exciting approach to it. After focusing almost exclusively on Tyler in the first half, there's a hard cut and suddenly Emily takes center stage. Two mismatched siblings, two different stories, connected by a dramatic event. The fact that Tyler doesn't actually play a direct role in the second half, after the thoroughly violent beginning, but only an indirect one, is a brave decision that works surprisingly well.

Despite this, it must also be said that the drama is a truly exhausting work from a stylistic point of view alone. There are long tracking shots - often shaky - that only serve to inflate the running time to well over two hours. Also, some dialogue sequences drag on extremely tenaciously without really advancing the story(s). One senses that Shults has tried to make his film feel authentic and bring the audience as close to the action as possible. This may work, but it's also really tiring in the long run. Surely, the stories of the two siblings aren't supposed to be fun, they are supposed to be upsetting, thought-provoking and emotionally touching. But a smidgen of entertainment value wouldn't have hurt.

On the contrary, for all its positives - from the filmmaker's ambitions to the terrific ensemble to the story - Waves offers just under two and a half hours of shaky dreariness. True, there are moments that are genuinely beautiful. But all in all, a visual as well as dramaturgical heaviness dominates the film, which makes going to the cinema a real challenge. For those who are willing to face it and then be rewarded with an intense arthouse drama, the film is well worth seeing. For all others, the purchase of a ticket can only be recommended with reservations.