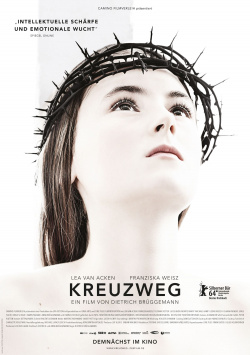 Stations of the Cross

14-year-old Maria (Lea van Acken) grows up in a strict Catholic environment. The priestly brotherhood to which her family belongs rejects all things modern and wants to continue the church traditions unadulterated. Especially Maria's mother (Franziska Weisz) is very anxious to keep her daughter away from all sinful attempts of the modern environment. She never misses an opportunity to reprimand her daughter as soon as she does something wrong in her eyes. In order to meet the high demands of her priest and her mother, Mary wants to sacrifice her life for Jesus. In doing so, she follows Jesus' way of the cross. Only Christian (Moritz Knapp) from her parallel class makes the girl doubt again and again that the path she has taken is actually the right one.

With Way of the Cross, the Dietrich siblings and Anna Brüggemann strike completely new notes after their joint screenplays Renn, wenn du kannst and 3 Zimmer/Küche/Bad. While these films were rather light comedies with a slight dramatic touch, The Passion of the Young Maria is really heavy fare. The film is not only dramaturgically very depressing. Also the production demands a lot from the viewer. Following the individual stages of Jesus' suffering, Stations of the Cross is divided into fourteen chapters, each of which is filmed in a fixed setting. In times when many filmmakers relied on unsteady hand-held cameras and fast cuts, this seems a bit strange. But it is exactly this rigidity that can create a very oppressive atmosphere in which the viewers have to watch helplessly as Maria slides more and more towards the abyss.

How the child is put under such psychological pressure here by her priest with his sparing good nature, by her domineering mother and her ever-silent father is extremely painful to watch. Since the motionless shots offer no distractions and literally force the viewer to fully expose themselves to this ordeal, Stations of the Cross becomes such an intense experience. What you see here is not easy to shake off, even after the credits roll. What director Dietrich Brüggemann has brought out of his actors here is extremely impressive. Fourteen-year-old Lea van Acken in particular plays with a stunning naturalness that is rarely seen in young actors. Franziska Weisz also deserves great praise for her courage in playing a mother whom the audience can only hate. Her acting is so intense that she repeatedly punches directly into the pit of the audience's stomach with her words and looks.

It is to the credit of the Brüggemann siblings that their script does not degenerate into a sweeping critique of the church. It would have been easy to escalate into a general rejection of religion here. But that doesn't happen. Rather, the film is about the consequences of religious fundamentalism, which has noticeably increased in very different faiths, especially in recent years. The film also subtly questions the reasons why more and more people today take refuge in religion and seek support there. The fact that it is precisely this longing to be caught that is being exploited by radical forces makes this film very topical and also extremely important.

Crossroads is a drama that makes you angry, that asks many important questions without claiming to know the answers to them. It is a film that deals with the negative aspects of religions without condemning the faith itself. It's a superbly acted, intense and, as a result, exhausting drama that lovers of challenging German arthouse cinema shouldn't miss. Worth seeing

Cinema trailer for the movie "Stations of the Cross (Deutschland 2013)"
Loading the player ...