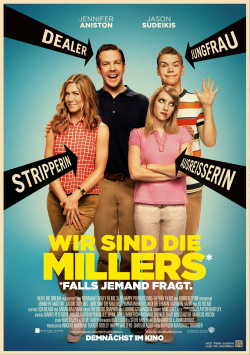 David Burke (Jason Sudeikis) enjoys his low-key single existence as a small-time drug dealer. He abides by a few important ground rules: he doesn't sell hard drugs and his customers can't be kids. And always stay inconspicuous. But when the shy neighbourhood boy Kenny (Will Poulter) clashes with a group of teenagers when he tries to protect the cheeky street girl Casey (Emma Roberts) from them, David throws the last basic rule overboard and messes with the half-strong punks. This has nasty consequences, though, as the boys fall all over David, taking all his earnings and savings. This would only be half bad if it weren't for David's wacky supplier Brad (Ed Helms), who he now can't pay. But Brad offers him a deal: if he smuggles a shipment across the border from Mexico for him, they would not only be even, he would also be paid handsomely. Left with no choice, David must find a way to appear as inconspicuous as possible at the border. That's when he gets a great idea: as a stuffy family vacationing in Mexico in an RV, he'd never be frisked. And so he recruits his neighbor, stripper Rose (Jennifer Aniston), as well as Kenny and Casey, to join him in miming perfect American family for a few days. It's a foolproof plan that, of course, is bound to go awry.

After making audiences laugh together in Kill the Boss, Jason Sudeikis and Jennifer Aniston were in front of the camera together again for We're the Millers. Directed by Rawson Marshall Thurber, Aniston and Sudeikis stumble from one chaotic situation to the next as a not-really-harmonious trophy couple. As in his 2004 hit Voll auf die Nüsse, Thurber mixes biting wordplay and classic slapstick with some very crude interludes, which will be a lot of fun for fans of hearty Hangover humor. When, for example, is shown in all clarity, what consequences a spider bite in Kenny's groin has for the boy, then this is truly not for the faint-hearted. But the comedy also doesn't try to be anything more than uninhibitedly silly fun. This should become clear at the latest in the scene in which David visits his drug supplier Brad in his completely overstated swanky office. There an aquarium scene takes place, which is so wonderfully stupid that you can't help but laugh heartily.

It's a pity that the few almost satirical moments, which deal with the immigration policy of the USA, are almost completely buried under the many sex jokes and the relentless slap-up humor. What Thurber manages to do very well, on the other hand, is that despite the rather lowbrow gags, his film never really feels flat. This is because, while he exposes his characters to ridiculous and absurd situations, the characters themselves always remain charming and endearing despite their obvious shortcomings.

Surely, We Are the Millers is not what is commonly referred to as great cinema. The film is simply light comedy entertainment with a bit of action and the sadly inevitable dose of morality at the end. And as such, it works really well. The cast is very good across the board, with Will Poulter in particular proving to be the absolute ideal choice as the slightly naive and extremely shy Kenny, based on his facial expressions alone. So if you just want to laugh at wonderfully funny nonsense and don't mind gags that go way below the belt, you'll be entertained for almost two hours. And this even continues during the credits, when Jennifer Aniston is confronted with her Friends past in a very nice way in the outtakes. Therefore, even if not every gag is a hit, there is a very clear bottom line for this chaotic road trip with the Millers: worth seeing!