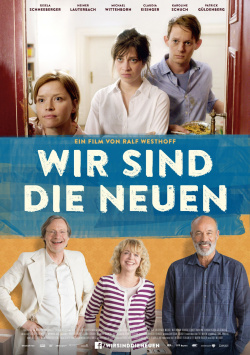 We are the new ones

What to do when you are suddenly thrown out of your beloved apartment at 60 and have to realize that you can no longer afford anything comparable in a city like Munich with a small pension? Anne (Gisela Schneeberger) is confronted with this question completely unexpectedly. But out of her distress an idea is suddenly born that sounds as crazy as it does logical: she decides to revive her old student flat-share. After a few refusals, her old buddies Eddi (Heiner Lauterbach) and Johannes (Michael Wittenborn) are persuaded to let the spirit of the 68ers back into their lives. Together, the three look forward to long evenings with good wine and heated discussions. But when they meet their new neighbours, the students Katharina (Claudia Eisinger), Barbara (Karoline Schuch) and Thorsten (Patrick Güldenberg), the illusion of an exuberant flat-sharing existence is abruptly shattered. Because the students of today seem to value peace and quiet and a completely fun-free existence in the midst of cold designer furniture. In their everyday life, which is completely determined by the pressure to perform, there's one thing they don't need: party-happy, clingy pensioners. It soon becomes clear that not only different generations, but also two completely different worlds collide here - and the really big row is only a matter of time.

With his first two feature films Shoppen and Der letzte schöne Herbsttag (The Last Beautiful Day of Autumn), director and screenwriter Ralf Westhoff has already demonstrated a very good knack for clever wordplay and humorously exaggerated everyday situations. And stylistically, these two films have also pleasantly stood out from the mass of German comedy fare. His third directorial effort, Wir sind die Neuen, is probably his most conventional work to date, but that doesn't mean that this turbulent battle of the generations is any less amusing. On the contrary, some of the exchanges between the old-68s and the seemingly very arrogant students are stunningly funny and once again reveal Westhoff's great talent for wonderful dialogue and comedic timing.

Naturally, the whole thing is already very exaggerated. But what might seem like a collection of clichés with many other directors just works really well with Westhoff. This is due to two factors. First, there's the excellent script, which reveals an unexpected depth just beneath the humorous and exaggerated surface. Westhoff manages to entertain his audience excellently and to give them 90 very charming, funny and entertaining minutes, while at the same time addressing some important social problems such as the explosion of rents in big cities, poverty among the elderly or an education system determined by pressure to perform. The fact that he never falls into the much-used consternation mode with all these heavy topics and is able to build his humor on a serious foundation without completely watering it down is quite a feat.

The second factor is the actors. Again, Westhoff and his team hit the bull's eye. In particular, the retired trio of Gisela Schneeberger, Heiner Lauterbach and a wonderful Michael Wittenborn really infect the audience with their obvious joy in playing. It is simply fun to watch the agile over-60s trying to feel the magic of their old flat-sharing life once again. But also their younger counterparts, who want to prevent this with all their might, embody the neuroses and the near nervous breakdown bordering on arrogance of the young with obvious pleasure.

We are the Newcomers is a very good example of how even serious topics lend themselves to light entertainment and how effective clever wordplay can be in combination with playful actors. If you love being allowed to laugh heartily at the cinema without being completely intellectually underwhelmed, then you should definitely not miss this wonderful flat-sharing comedy. Absolutely worth seeing

Cinema trailer for the movie "We are the new ones (Deutschland 2014)"
Loading the player ...