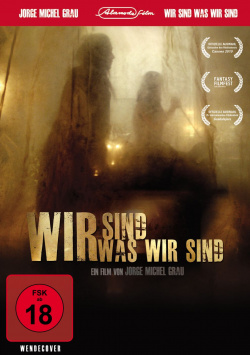 We are what we are - Blu-Ray

Film: At the latest since the quiet alien thriller Monsters should be clear that Arthaus and entertainment genres such as horror or fantasy are not necessarily mutually exclusive. The Mexican film We Are What We Are also skillfully mixes different genres, although here rather arthouse fans will get their money's worth.

After the death of his father, it is now up to the eldest brother Alfredo (Francisco Barreiro) to take care of feeding his mother (Carmen Beato) and his two younger siblings (Paulina Gaitán, Alan Chávez). The fact that the family are cannibals and Alfredo has to procure fresh human flesh doesn't really make things any easier. His attempts to bring street kids, prostitutes or homosexuals to the table fail miserably and the already crumbling family structure now threatens to break down for good.

We Are What We Are is undoubtedly an interesting film that wraps social and economic problems in a true horror scenario in an original way. However, the production proves to be a bit too unwieldy to reach mainstream audiences with this ambitious work. For instance, the audience never learns why the family needs to feed on human flesh. Much is hinted at, but there is no clarity at the end. Sure, a movie doesn't necessarily get better by explaining every element of its story. But when the viewer is kept in the dark about fairly important parts of a story all the time, it's just hard to fully engage with what's going on.

In addition, horror fans hoping for special gore effects might be bothered by the fact that the quiet moments predominate in the first place, and the horror often takes place in the background or only hinted at. This way, the film cleverly avoids any possible accusation of voyeurism or striking depiction of violence. It's the subtle handling of the gruesome goings-on in the cannibal family's home that really gives you goosebumps.

We Are What We Are is an exciting film experiment and tasty arthouse horror that might have trouble finding its audience due to its quirky mix. However, if you like it a little gory and enjoy cinematic experimentation, this Mexican shocker can definitely be recommended. Worth seeing!

Image + Sound: The gritty, dirty look of the film is also captured well by the Blu-ray. What could be interpreted as a visual weakness is a deliberately used stylistic device and thus part of the film. Overall, the image is clean and largely sharp. The sound is restrained in most moments, the sound effects used are well implemented and create in the viewers mind the very images that the film does not show. Good!

Extras: In addition to the short film Mi Hermano (approx. 9 min.), the disc still has a Making of (approx. 30 min.) worth seeing and a shorter look behind the scenes in the form of a TV special to offer. All in all, the interested viewer gets a good insight into this small but effective production. Finally, there is the trailer for the film to watch. Good!

Conclusion: We are what we are is arthouse horror of the more sophisticated kind, which comes along in its own special way but extremely effective. For genre fans willing to experiment a real tip, especially since the home theater version also has some worth seeing extras on board