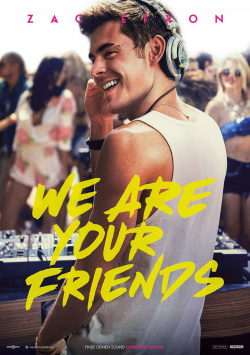 We Are Your Friends

Cole (Zac Efron) is convinced that if he can produce the one hit that will give him his breakthrough as an electro DJ, he'll be set for life. But until that happens, he has to DJ in small clubs for free drinks and keep his head above water with other odd jobs. That could change when he meets established hit DJ James (Wes Bentley). He recognizes the potential in Cole and takes him under his wing. And indeed, he is soon closer to the goal of his dreams than he could ever have imagined. But then he falls in love with Sophie (Emily Ratajkowski), the girlfriend of his idol and teacher. And when she seems to reciprocate his feelings, suddenly everything Cole has built for himself is back on the line...

We Are Your Friends is, on the surface, a very simple-minded party movie, all about partying, booze, drugs and beautiful people. But by using a mixture of drama and comedy mixed with some interesting visual gimmicks, director Max Joseph tries to look behind the preppy but also drab surface, the film keeps revealing an amazing depth and complexity that makes it engaging even for those viewers who don't really care about the DJ and party scene at all. Characters like DJ James, played with wonderful cynicism by Wes Bentley, are interestingly drawn, so that it is quickly revealed that they are more than the clichés they perfectly embody.

Now this is not to say that We Are Your Friends is a deep psychological and sophisticated examination of contemporary youth culture. No, first and foremost, the work is pure entertainment cinema that aims to appeal to a primarily young audience between the ages of 16 and 25. And often the production puts more emphasis on showing the audience Zac Efron's well-toned body or driving the men into hormone madness with Emily Ratajkowski's bra-free dancing than on stimulating the audience's intellect. Still, the film is just more than a flat homage to DJ culture. And if you manage not to be dazzled by the shimmering surface, you'll realize that the staging has even turned out to be really clever and subtle at times.

So We Are Your Friends skilfully manages the balancing act between pure entertainment and a bit of artistic ambition. It's a film that's a pleasure to watch, and not just because of the attractive actors, and it makes you extremely keen to party on with your own friends straight afterwards. And since the whole thing is also convincingly conveyed in terms of acting, the bottom line is a clear: absolutely worth seeing, despite a few minor weaknesses!

Cinema trailer for the movie "We Are Your Friends (USA 2015)"
Loading the player ...