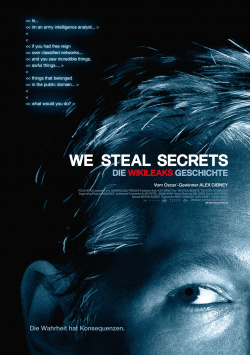 We steal Secrets: The Story of Wikileaks

Even before Edward Snowden, explosive revelations of what were actually secret documents caused an enormous stir worldwide. Julian Assange, with his website Wikileaks, became hero to many, public enemy number one to others. Is Assange a fighter for free speech, or rather a ruthless terrorist and traitor? Who is this mysterious and not uncontroversial man and how did WikiLeaks come into being? Where does Assange get his information from and what role did former soldier Bradley Manning play in this? Filmmaker Alex Gibney tries to get to the bottom of these and many other questions in his documentary We Steal Secrets: The Story of Wikileaks. Using countless interviews and archival footage, he creates a very complex picture of an extremely layered story in which the search for the truth about the truth-loving Julian Assange proves to be extremely difficult.

Gibney has clearly made an effort to stage a very balanced documentary. It was not intended to be a paean to Assange, nor a cinematic hounding of the WikiLeaks founder. Gibney attempts a portrait of the inscrutable man, trying to fathom the motivations for his very particular sense of justice, while at the same time showing the consequences of revelations like the secret documents published on WikiLeaks. Can there be truth at any price, or are there also situations in which such revelations could also harm innocent people? These are extremely complex questions that the film deals with - and precisely therein lies its only notable weakness.

For over two hours, the viewer is bombarded with information every second, which one can only process to a limited extent in its abundance. Even with great interest and a certain prior knowledge, it is difficult in the end to follow all the connections and to find one's way in the web that Gibney has carefully untangled. Certainly: the documentary is highly interesting and exciting, it is stirringly staged, it stirs up and poses some important questions that not only opponents of Assange, but also those viewers who consider him a hero, should definitely grapple with. There is no clear good and evil, no clearly definable right or wrong. The film exposes that quite well.

However, the documentary would simply be better served as a two-parter on television. Served in smaller doses, viewers wouldn't feel so beaten down at the end, there would be enough room to reflect on what they've seen and figure out the convoluted connections. Because actually We Steal Secrets: The Story of Wikileaks tells two different stories. Although they are connected, the information about Bradley Manning is pushed too much into the background by the information about Assange to really have a lasting effect.

Despite enormous information overkill and the weaknesses that come with it, Alex Gibney has staged an important and exciting documentary, which has reached an enormous topicality, especially in the context of the discussions about the case of Edward Snowden. A film that is about much more than just the story of WikiLeaks. It is a very essential question about the price of truth. The cost of a movie ticket is a good place to start! Absolutely worth seeing for attentive viewers with a keen interest in the subject matter!

Cinema trailer for the movie "We steal Secrets: The Story of Wikileaks (USA 2013)"
Loading the player ...