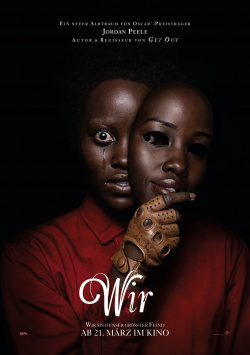 Since having a traumatic experience at an amusement park on vacation as a child, Adelaide Wilson (Lupita Nyong'o) has avoided the place - until she is persuaded by her husband Gabe (Winston Duke) to spend a relaxing day there with her children and friends. But with that, the family vacation on the Northern California coast turns into a tangible nightmare when four figures appear outside the vacation home in the evening, looking disturbingly like the Wilsons. And the eerie doppelgangers seem to know only one goal: to wipe out the family completely. For Adelaide and her loved ones, a bloody struggle for survival now begins, and it takes an unexpected turn.

We is the hotly anticipated follow-up to Jordan Peele's surprise hit Get Out. Peele has stayed true to the horror genre here, once again mixing it with a socially conscious message. We is suspenseful, a bit bloodier than Get out, and especially in the last third very ambitious. Maybe a little too much. Because as a viewer you have to get involved with something very abstruse to be able to recognize and appreciate the message the film is trying to convey. And that won't be possible for everyone. This might also be due to the fact that there are a lot of unanswered questions and not everything is explained in detail. On the one hand, this makes the ending more effective, but it also makes the film as a whole a little more difficult to access.

There's no question about it: Jordan Peele manages perfectly to build up an eerie, oppressive atmosphere that, especially in the first hour, ensures that We is simply an effective horror thriller. Even before there are any explanations that put a finger on an uncomfortable wound in our society, the film simply provides thrilling goosebump entertainment. The doppelganger versions of the Wilsons are extremely creepy, thanks in part to the great acting of all the actors.

The rest of the film will divide opinion. For some, the whole thing will be too abstruse, too drawn out and too thick. For others, it's a masterpiece of modern horror cinema that brings the forgotten of our society into focus in a haunting way. Either way, you have to give Jordan Peele credit for delivering a really good film that not only entertains well and offers a few successful shock moments, but also makes you think. And that's exactly why We is then, despite minor weaknesses: Absolutely worth seeing!