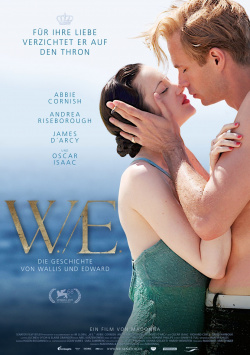 No matter what you may think of Madonna, her importance to recent music history simply cannot be denied. Madonna has played a major role in shaping pop music over the past three decades, and despite a few not-so-successful projects, has managed to stay relatively high up in an increasingly fast-paced business. And that definitely deserves respect. When it comes to acting, however, Madonna has so far been denied that respect. With the exception of the musical adaptation Evita, which can be considered a success, her excursions on the big screen were not really brilliant, which was seen by both critics and the audience. Now Madonna is trying again to assert herself outside of music. Not in front of the camera, though, but behind it.

In her second directorial effort, W.E., Madonna tells the story that was only hinted at in the Oscar winner The King`s Speech: the love between the heir to the British throne and later (short-lived) King Edward VIII. (James D`Arcy) and the twice-divorced American Wallis Simpson (Andrea Riseborough). But although this story, which begins as a simple affair and escalates into outright scandal when Edward renounces the British crown for love, offers enough material for a feature film, Madonna has decided to mix this story with a second plot layer.

This is set in 1998 New York, where the Wallis Simpson-named Wally Winthrop (Abbie Cornish) feels trapped in a hapless marriage to the wealthy William (Richard Colye), for whom she has given up her beloved Ob at the Sotheby auction house. Increasingly, she visits her former workplace for an exhibition of the Duke and Duchess of Windsor's possessions, which are about to go under the hammer. Deeper and deeper, Wally takes refuge in the love story of Wallis and Edward, trying to escape her own reality with her daydreams. As she befriends charming custodian Evgeni (Oscar Isaac) during her numerous visits to the exhibit, the parallels between her own life and Wallis' become increasingly clear...

W.E. certainly won't help Madonna completely turn her not-so-great movie reputation into a positive. However, the mix of drama and romance makes it clear that Madonna can do more than many of her critics want to give her credit for. Certainly, some scenes in which the camera work is supposed to appear artful by using stylistic devices like blurring or unconventional shots, just seem forced and downright disturbing. And also the mixing of the two levels of action only works to a certain extent. As good as Abbie Cornish plays and as successful as the story about Wally, frustrated by her life, is in itself, for the actual main story, the love between Wallis and Edward, the 1998 plotline is more of a distraction than an enrichment.

The royal love story, on the other hand, is not only convincing in terms of acting, but is also very engagingly staged. Carried by a strong performance of Andrea Riseborough, known from films like Brighton Rock or We want Sex, traded in beautiful images and filled with a worth seeing set is not only offered here emotional cinema of the particularly romantic kind. As a biopic about an interesting woman, this part of the film also works very well.

So, on balance, W.E. delivers a somewhat uneven picture. Individual elements work well, but the connection of the various set pieces is a bit bumpy. Instead of simply offering romantic entertainment cinema, for which this material would have been very well suited, Madonna tries too hard to prove herself as a sophisticated filmmaker. And that's exactly how she gets in the way of herself and her film. W.E. is not a bad movie, but it's not as good as it could have been with its actors, the underlying story and the set. And that's why this drama can only be judged as worth seeing with some clear deductions

Cinema trailer for the movie "W.E. (Großbritannien 2011)"
Loading the player ...