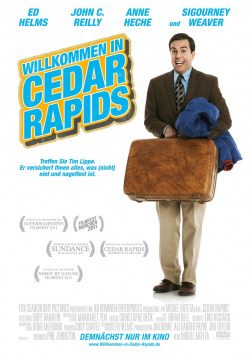 As part of the wolf pack in the Hangover movies, Ed Helms also became a household name in Germany. But whether the actor, who already enjoyed some popularity in the U.S. due to his four-year stint on the popular Daily Show and his role in the comedy series The Office, can more or less carry a feature film on his own as a leading man will now be revealed in Welcome to Cedar Rapids.

In the Alexander Payne (Sideways) produced comedy, Helms plays insurance agent Tim Lippe, who lives a more than tranquil life in the small town of Brown Valley. An affair with his former teacher (Sigourney Weaver) is the only truly exciting thing in Tim's daily life. But when one of his colleagues dies in a messy sex accident, Tim must leave Brown Valley for the first time in his life to represent the deceased at the annual insurance convention in Cedar Rapids. And no sooner does he arrive in the big city than Tim puts his foot in his mouth. When he meets his roommates, the urbane Ronald Wilkes (Isiah Whitlock, Jr.) and the somewhat pushy Dean Ziegler (John C. Reilly), and falls head over heels for the pretty Joan (Anne Heche), chaos seems perfect for the quiet country boy. But that's just the beginning.

Welcome to Cedar Rapids director Miguel Arteta (The Good Girl) has directed an entertaining blend of arthouse comedy and mainstream comedy. Ed Helms is perfectly cast as a naive country bumpkin, even if his role is only slightly different from the characters he plays in Hangover or The Office. When Tim meets a well-read prostitute (Alia Shakwat) in Cedar Rapids, for example, and freely fails to recognize her as such, or when he desperately tries to stay away from Dean, who he sees as too vulgar, it always makes for some nice laughs. Also John C. Reilly, who is once again allowed to go all out comedically, is responsible for this and does his thing really well, for example as a bathing R2D2.

Even if some gags rather run in the void and the staging sometimes seems a little effortfully weird, so Welcome to Cedar Rapids has become a really charming comedy in the end. The more Tim befriends his colleagues and learns sometimes bitter truths about life outside his little microcosm, the more the film's entertainment value increases. Quite big laughs are rather the rarity, but an almost continuous smirk is guaranteed.

A little Up in the Air, a pinch of Hangover and some Sideways - and ready is a nice cinema fun with a good-humored cast ensemble. Despite a few crude scenes rather something for friends of the quieter humor, but for them is then also: absolutely worth seeing!

Cinema trailer for the movie "Welcome to Cedar Rapids (USA 2011)"
Loading the player ...