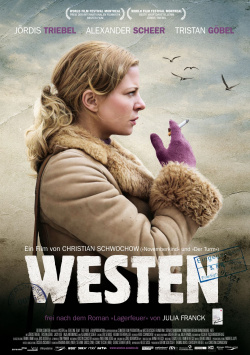 After her Russian boyfriend dies in a car accident, Nelly Senff (Jördis Triebel), a chemist with a doctorate from East Berlin, wants to start a new life in the West with her son Alexej (Tristan Göbel). But the path from the application to leave the country to its approval is hard and long. When Nelly and Alexej are finally allowed to go to the West in 1978, the young mother is filled with anger and disillusionment - feelings that do not subside even after crossing the border. As soon as she arrives at the refugee camp in West Berlin, Nelly has to endure constant questioning by the Allied secret services before she receives her residence permit and is allowed to look for a job. But Nelly does not see why she should have to pay such a high price for her freedom. She tries to protect her dignity and privacy and still achieve her goal. Will CIA employee John Bird (Jacky Ido) be able to help her? Or does her pride stand too much in the way of a happy future in the West?

Westen is the latest work from director Christian Schwochow, who has been one of the best makers of young German film since Novemberkind or the multi-award-winning TV film Der Turm. In this drama based on the novel Lagerfeuer by Julia Franck, Schwochow can once again prove that he certainly lives up to this reputation. The director realizes the script, written by his mother Heide Schwochow, in a seemingly sober, almost documentary style, which gives the story an enormously oppressive atmosphere that can unfold its full power in some very intense moments.

However, the film also has to contend with some minor lengths and other problems. Nelly's anger and frustration at the fact that her desire for freedom and the chance to start a new life after crossing the border is far from being fulfilled is completely understandable. Still, not all of her reactions are truly understandable. At times, her behavior even makes her seem downright unsympathetic, especially considering the fact that it's not only her own life at stake here, but also that of her son. The sometimes very unsteady camera work and the somehow unfinished ending are also points that might bother some viewers.

Over any doubt, however, are the acting performances, especially that of leading actress Jördis Triebel. She plays the combative woman with enormous intensity, which makes this character fascinating and, above all, very, very human, even in those moments when you as a viewer may not necessarily agree with Nelly's behaviour. All in all, Westen is a somewhat unwieldy work, heavy and often unpleasant fare, but thematically very interesting and of a very high standard in terms of acting. Lovers of German program cinema fare of the somewhat dull and challenging kind can therefore confidently embark on crossing the border into the West with Nelly and Alexei. Worth seeing

Cinema trailer for the movie "West (Deutschland 2013)"
Loading the player ...