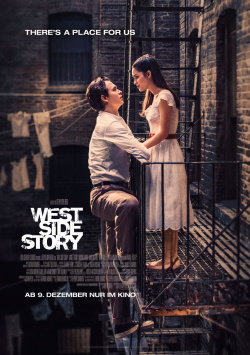 One of the greatest and most beloved musicals of all time returns to the big screen. "West Side Story" takes us to 1957 New York, where the streets are dominated by rival gangs the Jets and the Sharks. Tony (Ansel Elgort), co-founder of the Jets, falls in love with Maria (Rachel Zegler), the sister of Sharks leader Bernardo (David Alvarez). He's just as upset about it as Tony's best friend and Jets leader, Riff (Mike Faist). This love just can't be! But while Tony and Maria are convinced that in the end love can triumph over hate and prejudice, if only it is strong enough, Bernardo and Riff see only one way out: A fight for their gang's honor...

As early as 1961, Robert Wise adapted the musical based on William Shakespeare's "Romeo and Juliet" for the screen, with music by Leonard Bernstein, song lyrics by Stephen Sondheim and book by Arthur Laurents. It won an incredible 10 Oscars and is still one of the best cinema musicals ever. Of course, the question arises whether a remake would have been necessary at all. But Steven Spielberg proves with his first excursion into the genre of musicals that one can remain absolutely faithful to the known template and yet gain new sides to it.

With the very authentic casting, the team around the master director has proven almost throughout a very good hand. Only leading actor Ansel Elgort seems a little too smooth for the role of Tony, even if he is fully convincing acting. However, a special coup could be landed with the casting of the character of the older shop owner Valentina, who has taken Tony in after his prison sentence. That's because that role is played by Rita Moreno, who played Bernado's girlfriend Anita in the 1961 film and won an Oscar for it. Moreno also gets to sing one of the musical's most famous songs, the ballad "Somewhere", in the new version. Simply beautiful.

Spielberg's "West Side Story", much of which was filmed on location in New York, stirringly depicts not only the beauty and tragedy of the love story, but also the timeliness of the conflict between different cultures. Here prejudices and hatred born from them collide, which could be prevented if one would put aside one's prejudices and allow more tolerance in one's heart - which, as the film also shows well, has to come from all sides in order to work.

"West Side Story" perfectly manages the balancing act between classic musical and fresh new interpretation. Often it's just nuances that have been changed, but they give Spielberg's version a character and relevance all its own that gives the remake its justification despite all the similarities to the first film version. Admittedly, as a great admirer of Steven Spielberg's work, I may be somewhat biased. But even with the necessary professional distance, I can only call this musical adaptation a success. A rousing, moving and, as I said, thoroughly relevant film that can, of course, be warmly recommended to musical fans. Absolutely worth seeing!

Cinema trailer for the movie "West Side Story (USA 2020)"
Loading the player ...