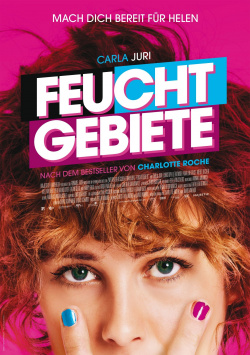 Attention Scandal! After Charlotte Roche's novel Wetlands has already shocked, thrilled and repelled over 2.5 million readers, it was naturally only a matter of time before a filmmaker would also venture into this material. It was clear from the start that an adaptation of the book would not be easy, as Roche describes a number of things in the work that could never have been visually realised in such a clear way without the film being immediately banned. But with David Wnendt (Kriegerin) a young filmmaker was found who has exactly the right ambitions and the right sense of craftsmanship to translate a book like Feuchtgebiete into an adequate visual language.

The story was changed for the film version only in nuances. At the center is the schoolgirl Helen (Carla Juri), for whom there is only one thing she has to suffer even more than the divorce of her parents (Meret Becker & Axel Milberg). For what feels like an eternity she has been tormented by painful haemorrhoids, against which even the assistance of her best friend and blood sister Corinna (Marlen Kruse) can do little. Helen loves to break taboos and explore boundaries. And for this also the depilation of the intimate area is an evil, to which the young woman exposes herself of necessity. But a sharp razor blade in the lower body, hemorrhoids and carelessness are not a good combination. And so Helen ends up in hospital after a particularly painful and bloody intimate shave, where her unusual injury and unabashed manner not only win her the attention of head doctor Prof. Notz (Edgar Selge). The sympathetic nurse Robin (Christoph Letkowski) is also quickly taken with the unconventional girl. For Helen, who hopes to reunite her parents through the hospital stay, Robin quickly becomes an important ally - and perhaps even much more.

With the first shot, which seemingly confirms the audience's expectations, only to be taken ad absurdum in a very original way, director Wnendt shows that he knows very well how to put his own stamp on the original. In terms of camerawork and editing, he repeatedly displays a finesse that you have to give a positive testimonial to, even if you are not really enthusiastic or even disgusted by the content of the film. Craft-wise, Wetlands is beyond reproach, which can also be said of the acting performances, with minor deductions.

The problem, however, is that the shock effects keep burying all the positives. Already with the book the clear language and the very explicit descriptions of not always appetizing things were so much in the foreground that the perhaps quite interesting psychological and dramaturgical aspects of the story were completely relegated to secondary importance. And the movie suffers from that as well. Of course, this raises the question of the necessity to choose a very clear language in words and pictures. The story and its characters hardly get the chance to develop and there is even the impression that a certain superficiality could be concealed with the disgusting effects.

But unfortunately this doesn't really matter. Because where already a large part of the buyers of the book did not decide to buy Wetlands because of the story, most viewers will also buy a movie ticket only because they want to be shocked and because they want to have a say. The film and book have the attention of the media in particular not because of their deep psychological or craft qualities, but solely because of the unabashed language. Without it, the novel would have disappeared into irrelevance and no one would be crowing about the film. Does this make Wetlands a bad film? Certainly not, even if that is a matter of personal judgement in this case in particular. Everyone has to decide for themselves whether they find what is shown refreshingly provocative and amusing or simply disgusting and unnecessarily distasteful. But the fact is that the film does not get the attention it deserves because of the aspects for which it actually deserves it.

Therefore, if you have read the book and belong to those who actually liked it, you will also enjoy the film version very much. This is ensured by the really good staging style and the convincing actors. But who does not want to get everything shown in unadorned clarity and who are already the first sentences of the novel on the stomach, which should make a wide berth around this wetlands.

Cinema trailer for the movie "Wetlands (Deutschland 2013)"
Loading the player ...