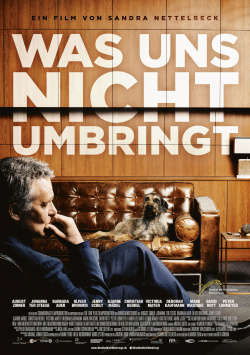 What doesn't kill us

Psychotherapist Max (August Zirner) has managed to build a well-functioning, familiar world for himself - even though his daughters, his ex-wife (Barbara Auer) and, more recently, his melancholy dog don't exactly make for a calm everyday life. But it's his gambling-addicted patient Sophie (Johanna Ter Steege) who keeps throwing him completely off his game. Finally he has to admit to himself that exactly what should never happen to a good therapist has happened to him: he has fallen in love with his patient. What should he do now? Follow his heart or his professional ethics? One thing is clear: in order to properly help his patients, he must first sort out his emotional mess himself.

2001 August Zirner already appeared as a therapist in Sandra Nettelbeck's hit film Bella Martha. Now the director has given this character his own film with Was uns nicht umbringt. No, that's not quite right, because Max is at the center, but around him a variety of smaller stories unwind, which makes the whole thing more of an episodic ensemble drama with comedic moments. And as is often the case with films that tell multiple stories at once, some work better than others. There's one little subplot, for instance, that even after the film is over, you wonder what use it was to the film.

So the individual storylines meander back and forth between beautiful and moving to shallow and inconsequential. Ultimately, this leads to the fact that despite great actors and engaging imagery, there's no real coherent overall picture here. The movie is never really bad, but it's also not consistently good. At times it allows us as viewers to empathize with the characters, to laugh or cry with them, only to leave us completely cold at other times.

What Doesn't Kill Us is still worth watching, though, despite this clear weakness on balance. Because when it works, it works really well. Then Sandra Nettelbeck and her great ensemble manage to hit the audience right in the heart or make them laugh with sometimes quite absurd situation comedy. The renunciation of one or two plot lines might have done the overall work some good. But the successful aspects are strong enough in the end, so that lovers of German entertainment cinema of the somewhat more sophisticated and yet light kind will not regret buying a movie ticket.

Cinema trailer for the movie "What doesn't kill us (Deutschland 2018)"
Loading the player ...