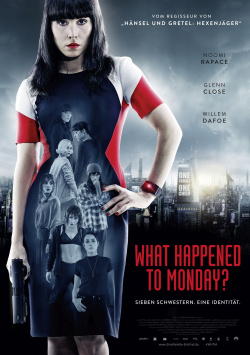 What Happened To Monday?

In the near future, the world is groaning under famine and overpopulation. To deal with these problems, a rigorous one-child policy is enforced on a global scale. This forces the seven Stettman sisters (Noomi Rapace) to grow up in hiding. They have been trained for years by their grandfather Terrence (Willem Dafoe) to play a perfect game of hide and seek. Each of them is only allowed to leave the home they share one day a week - the one whose name they bear. Inside the safety of their four walls, each of the sisters is allowed to be whoever they want, but outside they must always pretend to be one and the same peron. Should their cover be blown, it would mean their certain death. This works out very well for a long time, until Monday fails to return home one Monday.

The idea for What Happened To Monday? was conceived back in 2001 and quickly made it onto the Hollywood Black List for best previously unfilmed screenplays. Originally, two identical brothers were the focus of the bleak vision of the future. When director Tommy Wirkola (Hansel and Gretel: Witch Hunters) took on the material, the two brothers became seven sisters. The story is set in a not-too-distant future that is plagued by problems that we already know - even if not to this extent. This makes the basic idea quite realistic and you understand the ideology behind the actions of the politician played by Glenn Close - even if it doesn't excuse her actions. But - and this is important for the film to work - the future that is laid out here is rooted in the here and now. And that's what makes it so depressing and, to an extent, authentic.

Besides the suspenseful story, which only gets a wee bit too conventional towards the end, the film thrives primarily on the versatile acting of Noomi Rapace, who perfectly manages to bring seven thoroughly different characters to life. When all seven sisters interact with each other, the audience quickly forgets that this is really just one actress. This is somewhat reminiscent of Tatiana Maslany in the series Orphan Black, where she embodies completely different clones of one person. Rapace also manages to give each sister a distinct personality, even if she has comparatively little time to do so.

What Happened To Monday? is a suspenseful, occasionally quite brutal dystopia that is even laced with a bit of satirical humor here and there. The film is not perfect alone due to the somewhat weak finale, but still offers damn good entertainment that also makes you think. Solidly staged and super played, there is for this vision of the future a clear: Absolutely worth seeing!

Cinema trailer for the movie "What Happened To Monday? (Großbritannien 2017)"
Loading the player ...