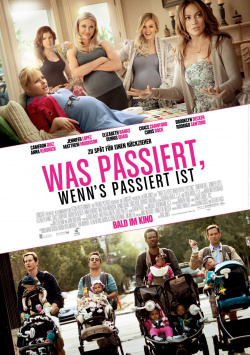 Actually, TV fitness guru Jules (Cameron Diaz) makes sure her contestants lose weight and achieve as flat a stomach as possible. Too bad her own is now getting fatter by the week. Because what was supposed to be a light-hearted fling with dancer Evan (Matthew Morrison, Glee) is soon turning into a little family. And Jules first has to come to terms with the thought of the coming offspring. This is something photographer Holly (Jennifer Lopez) only dreams about. She has been trying to get pregnant with her husband Alex (Rodrigo Santoro) for quite some time. But since all attempts so far have been in vain, the couple has decided to adopt. But even this plan turns out to be more difficult than expected. Pregnant up-and-coming author Wendy (Elizabeth Banks) has problems of a completely different kind, as her husband Gary (Ben Falcone) suffers extremely from the competitive games of his father (Dennis Quaid), whose much younger wife Skyler (Brooklyn Decker) is also expecting a child. And that, of course, has consequences for Wendy's pregnancy. And finally, there's young Rosie (Anna Kendrick), who has to worry that a one-night stand with Marco (Chance Crawford) hasn't been without consequences. But would the handsome chef be the right person to take on the role of steady life partner and father?

What Happens When It Happens is based, like the comparable ensemble film He Just Doesn`t Like You, not on a novel but on a non-fiction book. Heidi Murkoff`s Pregnancy and Childbirth was an international bestseller and is considered a kind of bible for expectant parents, especially in the US. The frank and sometimes very humorous style in which Murkoff wrote down her tips convinced the producers that the guidebook would make the perfect material for a big screen comedy. With director Kirk Jones, a filmmaker was hired who, with films like Long Live Ned Devine! and Everybody`s Fine, has a decent repertoire of sophisticated comedies to his name. A very prominent cast also gives hope that this cinematic pregnancy course will have similar entertainment value to the book.

But unfortunately that is not the case. The gags, with a few exceptions, are served up lukewarm at best. The production lacks any form of originality, instead ticking off one cliché after the next and then dousing the whole thing with completely unnecessary icing. At some points you can clearly notice how good the actual intentions of the makers were. For example the group of fathers who meet regularly in the park to live out their fatherhood according to their very own rules. There's a lot of humor in this idea, which actually shines through effectively from time to time. But whenever the humor finally seems to become pleasantly biting, the kid gloves are quickly put on again to guide the action back into the well-behaved track on which this comedy drives most of the time.

Sure, who likes shallow US comedies that are primarily aimed at a female audience, he (she) will be able to have some fun at the sometimes very overdone goings-on maybe actually something like fun. For all others - and especially for male viewers - this film could unintentionally prove to be an extremely effective contraceptive. Because whether the viewers really feel like getting pregnant after seeing What Happens When It Happens, can rightly be doubted. Therefore: only very conditionally worth seeing!

Cinema trailer for the movie "What happens when`s happened (USA 2012)"
Loading the player ...