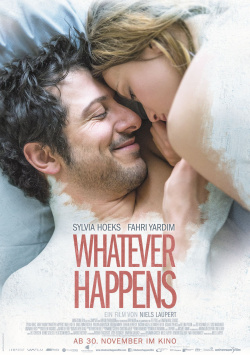 It begins like a romance we've been told countless times in the movies: After Julian (Fahri Yardim) and Hannah (Sylvia Hoeks) become roommates out of necessity, they initially (seemingly) dislike each other. This even goes so far that they want to dissolve their flat share after a short time. But then they discover feelings for each other and start a passionate relationship that seems to culminate in the very big love. And then they live happily ever after? Oh no! Because after only a short time Hannah becomes pregnant, which doesn't fit into their professional plans at all. And so they decide that photographer Julian will look after their daughter together, while Hannah commutes regularly to Frankfurt after only a short maternity leave to pursue her career there. Seven years later, father and daughter are a well-oiled team - but all passion seems to have died between Julian and Hannah.

The idea of Whatever happens is not new, but it is always good. Picking up a love story where most feature films leave off. What happens after the supposed happy ending. Does the great love endure when everyday life sets in. Do the violins still play when the lovers face the normal stumbling blocks of a relationship? It's also nice that director and screenwriter Niels Laupert flips the signs a little bit, in that in his story it's the woman who gets to have a career while the man stays home. This makes for a really interesting conflict situation. When Hannah realises that her daughter has a much closer bond with Julian and that she is becoming increasingly estranged from both of them, it adds an extra emotional element to the story.

But unfortunately it fails to live up to the potential that this creates. The production remains rather distant in its effort to be realistic rather than cheesy. Despite the really good acting of Fahri Yardim and Sylvia Hoeks, the characters seem strangely undercooled. An emotional relationship between the protagonists on screen and the audience just doesn't quite want to develop. In addition, the conflicts are increasingly repetitive, so that the dramaturgical tension curve at some point only runs horizontally.

This all could have been compensated with a really good, emotional and also surprising finale. But here of all places Laupert digs deep into the kitsch and cliché box in order to force a happy ending on the viewer that almost can't be surpassed in arbitrariness. Of course it's nice to see the people you've been following for around 100 minutes happy at the end. But that could have been accomplished in a less contrived and predictable way. Whatever happens has a lot of good ingredients: A nice idea, some very emotional moments and two good main actors. And yet, in the end it's just a too shallow rippling drama. Whatever happens - I don`t care! Only conditionally worth seeing!

Cinema trailer for the movie "Whatever happens (Deutschland 2017)"
Loading the player ...