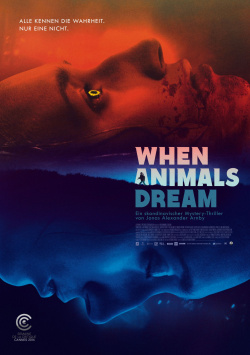 Marie (Sonia Suhl) is a very introverted young woman who lives with her father (Lars Mikkelsen) and her sick mother (Sonia Richter) in a small fishing village on the Danish north coast. When she starts a job at the local fish factory, she finds it very difficult to open up to her new colleagues. Only to the charming Daniel (Jakob Ofterbo) she feels quickly attracted. But Marie has no time for romantic feelings. Because she notices that her body begins to change strangely. Neither her father nor the family doctor want to tell her what is wrong with her. Marie won't let go and gets on the trail of a deathly silent secret of her family that provides her with terrifying answers. And it soon becomes clear that Marie needs to be protected not only from the fearful villagers, but especially from herself. But when the first mysterious deaths occur, it seems long too late for that.

Wherever you look, everywhere seems to be teeming with vampires and werewolves. Whether in books, TV series, musicals or in the movies, mystical creatures are currently booming. While many works either choose a romantic level to tell their stories or prefer to stick closely to the traditional guidelines, there are also stories that try to approach well-known myths far off the beaten track. One of the best examples of this might be the Swedish vampire film So Dark the Night, based on the great novel by John Ajvide Lindqvist, which was able to inspire not only with a very original but also extremely sensitively and atmospherically told story.

Now Danish filmmaker Jonas Alexander Arnby is trying to strike a very similar note with his unusual werewolf story When Animals Dream. Also with him it is less about striking effects and the actual horror aspect, but about poetic symbolism and an oppressively beautiful atmosphere, which is intensified by the slowness of the production. As a viewer, you first have to be able to get involved with this. If you can't, you won't only find the pace of the story extremely boring, but you'll also end up wondering what the whole thing was about. But if you're willing to engage with Arnby's somewhat unwieldy style and read between the lines, you'll be treated to a thoroughly fascinating genre film.

Besides the atmospheric images, it's the actors who make When Animals Dream worth watching. Newcomer Sonia Suhl's slightly unhinged, intense performance is particularly noteworthy. Suhl literally turns Marie into a mystical figure, exuding both a certain vulnerability and an eerie, animalistic toughness. Her performance blends perfectly with the images filled with melancholy and beauty, allowing the film to exude a very special fascination. It's guaranteed not to appeal to everyone, but open-minded genre fans will definitely find great pleasure in this Danish mystery thriller. And that's why we give it a convincing: Worth seeing!

Cinema trailer for the movie "When Animals Dream (Dänemark 2014)"
Loading the player ...