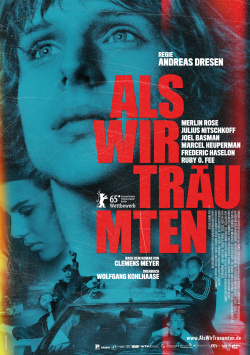 Leipzig, shortly after the fall of the Wall: at a time when the GDR had just disappeared and the new Germany was not quite there, young people in particular lack a foothold and prospects for the future, but at the same time the fall of the Wall makes everything seem possible. It is a wild time, which for Dani (Merlin Rose), Mark (Joel Basman), Rico (Julius Nitschkoff), Paul (Frederic Haselon) and Pitbull (Marcel Heuperman) is also the best time of their young lives. They enjoy new freedoms, experiment with alcohol and drugs, discover love and still have room in their heads for dreams big and small. But the more they are confronted with violence, disappointments and losses, the less room there is left for dreams.

With this film adaptation of Clemens Meyer's successful novel Als wir träumten (When We Dreamed), director Andreas Dresen once again proves his versatility after such diverse films as Sommer vorm Balkon (Summer in Front of the Balcony), Wolke 9 (Cloud 9) or Halt auf freier Strecke (Stop on a Free Road). The filmmaker thus shows a constant development and manages to surprise his audience again and again. Of course, this can happen in a positive as well as in a negative way. And so it is not uncommon for opinions to differ about Dresen's films, which will be no different with Als wir träumten.

There is no question that Dresen has succeeded very well in making the feeling of an upheaval palpable. This manifests itself not only in social form through the fall of the wall, but for the boys of Dani's clique also in a very personal way through the step from teenager to adulthood. The film illustrates very well how the young people here lose themselves more and more in their search for themselves, threatening to drift deeper and deeper into a whirlpool of violence, frustration and lack of perspective. For the most part, this is convincingly acted and also radiates a certain authenticity through the good coordination of camera, editing and music.

However, it must also be said that in some scenes the film loses itself too much in trivia or seems too unwieldy in its efforts to be close to reality to still be convincing. For viewers, who are getting a taste of a world that is foreign to them anyway, the whole thing becomes extremely exhausting at such moments. It's hard to identify with the characters and their stories, leading to a distance that significantly diminishes any intensity inherent in the production.

On the other hand, those who find themselves in the story or in one of its protagonists are unlikely to notice the minor flaws as such. What is clear, however, is that When We Dreamed is not a film for a broad target audience. It's not light fare that invites you to relax after a hard day's work. Rather, the film is a youth drama worth watching for arthouse cinema aficionados who enjoy heavier subject matter at the movies. For that audience, then, Dren's film about friendship, disillusionment and anarchy in the early '90s is certainly a very intense drama that deserves a clear worthy watch.

Cinema trailer for the movie "When we dreamed (Deutschland/Frankreich 2015)"
Loading the player ...