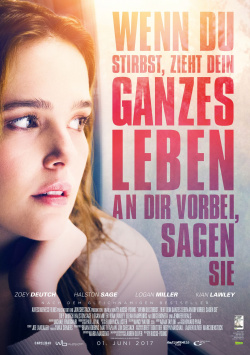 When you die, your whole life passes you by, they say

Sam (Zoey Deutch) seems to have the perfect teenage life: She and her clique are among the most popular girls at her school. She has a cool boyfriend who she plans to give her virginity to tonight. Everything perfect. The fact that she participates in giving outsiders a hard time - pffft, that's just part of it. That doesn't make her a bad person. Or does it? That's the question Sam has to seriously ask herself when she dies in a car accident one day after a boisterous party - only to wake up alive and kicking the next morning. The morning before, to be precise, because Sam is suddenly doomed to relive the last day of her life over and over again. And in the process, she soon realizes that her life was nowhere near as perfect as she thought.

The adaptation of the young adult book When You Die, Your Whole Life Passes You By says it hits theaters at the worst possible time. Because with the topics, which are treated here, just the much-discussed and celebrated NETFLIX adaptation of the best-seller dead girls do not lie very much more intensively, more unsparingly, more authentically and in every respect better dealt. Ry Ruso-Young's teen drama simply can't stand up to the direct comparison that's forced upon it. But even detached from a comparison, the film doesn't fare particularly well.

The reason for this is partly to be found in the very clichéd character sketching. Of course, the intention is to portray Sam's girlfriends as the worst screechy bitches of the self-absorbed selfie generation. However, the result is that none of the girls, the rather reserved Sam included, come across as genuinely likeable. Their path to purification is then also very superficially designed in a little over 90 minutes. And this is where the film's real shortcoming lies: superficiality is something that issues like bullying and suicide should definitely not be dealt with.

For teenage viewers between the ages of 12 and 15, these weaknesses won't carry much weight, as the film definitely has some successful aspects to offer its target audience. But if you don't let yourself be dazzled by the nice and rousing story, pretty actors and actresses and an atmospheric soundtrack and start to question the story and its message and critically analyse the production, you won't enjoy this drama very much. That's why it's only good enough for one: Only with significant cutbacks still worth seeing!

Cinema trailer for the movie "When you die, your whole life passes you by, they say (USA 2017)"
Loading the player ...