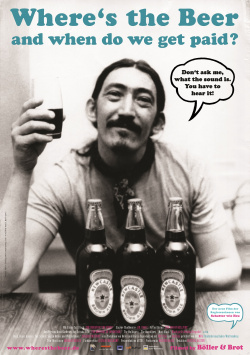 Where`s the Beer and when do we get paid

In the band Mothers of Invention alongside Frank Zappa, Jimmy Carl Black was something of a superstar. He was considered one of the best drummers in the world and played to sold-out crowds. But after Zappa broke up the band, so did the success. In addition to music, Black continued to run a painting business with fellow musician Arthur Brown for many years. In 1997, at a concert in Traunstein, the drummer noticed that he still seemed to have a very special effect on his female fans. Because in front of the stage stood the 20 years younger Moni, who adored him the whole time. And so it came to a very private tryst after the concert, as it is not uncommon for many rock musicians during their life on tour. But the story took a very unusual turn for Jimmy Carl Black, who used to like to be called The Indian oft he Group: he married his Moni and moved in with her in the small Bavarian village of Höpfling.

How does a musician from El Paso live in the Bavarian province? How does it feel to still have to tour in retirement to make a little money, since there was never any real wealth even in the most successful phase of his career? These are questions that filmmakers Sigrun Köhler and Wiltrud Baier, known as Böller & Brot, explore in their documentary Where`s the Beer and when do we get paid. For two years they accompanied Jimmy Carl Black with the camera until his death in 2008, had long conversations with him and his former companions and captured numerous amusing, but also movingly honest and a little disillusioning snapshots, but which show one thing in particular: even marked by cancer and in the face of his approaching death Jimmy Carl Black never lost his very special humor.

When Black, for example, goes on about the German dubbing of American films (They can`t do John Wayne in German), reveals his love for Tarantino`s Kill Bill or reveals that he drinks a cup of green tea every day because his wife forces him to, even though he actually hates tea, when he shares his expert knowledge of drumsticks with the camera with very dry humour or, while burning and packaging his CDs, rants about the fact that they have machines from Sony that do that sh. then you as a viewer really get the feeling that you are being offered a very honest, unadulterated insight into the life of the musician. At first glance, this may seem a bit trivial at some moments, because there's just not really much happening. But it is precisely this non-staged, rather unspectacular normality that makes the documentary so charming.

While some other aspects, such as the interviews with two other former members of the Mothers of Invention who can never remember the names of the artists they want to talk about, are very amusing and well done, the decision to include the conversations with residents from Höpfling (rock music? Yeah, san mir bei die Junkies, or what) only under longer shots of the Bavarian nature idyll, proves to be a bit tough and tiring in the long run. The contrast between the life of the aging rock musician and the provincial dulcimer and trembling lovers comes thereby much too little to the validity.

However, Where`s the Beer and when do we get paid has at the end enough wit, charm and heart to make the documentary quite particularly for fans of the musician worth seeing. But for anyone else interested in entertaining, interesting and amusing portraits, this mix of home movie and music documentary can definitely be recommended!

Cinema trailer for the movie "Where`s the Beer and when do we get paid (Deutschland 2012)"
Loading the player ...