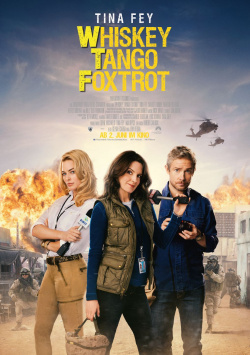 Boring reporting, desk work and a rather lame relationship - it just can't be. That's what ambitious TV reporter Kim Barker (Tina Fey) thinks when she spontaneously signs up to travel to Kabul for her network and report from there on the war in Afghanistan. However, she quickly reaches her limits in the reporter's camp in Kabul. But with the help of colleagues such as the attractive correspondent Tanya Vanderpoel (Margot Robbie) and the Scottish daredevil Iain (Martin Freeman), she quickly learns the most important rules of survival, which quickly lead to Kim's reports back home hitting home hard and thus her stay in Kabul is extended indefinitely. And so she must continue to deal with imperious U.S. military (Billy Bob Thornton), sleazy politicians (Alfred Molina) and the very everyday dangers in Afghanistan. And not infrequently, she wonders WTF?

Whiskey Tango Foxtrot is based on the book The Taliban Shuffle: Strange Days in Afghanistan and Pakistan, in which journalist Kim Baker recounts her experiences as a reporter and woman in Afghanistan and Pakistan. With Tina Fey as lead actress and producer, the acclaimed factual account has now been turned into a dramedy about war reporting and the sometimes very drastic clash of different cultures. Screenwriter Robert Carlock, who has won several awards for his work on the cult comedy show Saturday Night Live and the series 30 Rock, has attempted to adapt the material in a humorous but also authentic way. The same is true of Glenn Ficarra and John Requa's production. Already in their joint directorial debut I Love You Phillip Morris, the two have mixed drama and comedy into a very coherent, engaging whole.

And so Whiskey Tango Foxtrot also has some very strong moments to offer. Tina Fey is great as the lead, the chemistry between her and Martin Freeman is quite wonderful and the interplay with the rest of the great ensemble is spot on. The dialogue is extremely biting at times, making the film a satire of the quality of a classic like M.A.S.H. in its best moments. The problem is that this tone is not struck throughout. Mixed in with the humorous, satirical scenes, especially in the second half of the film, are repeated very serious and dramatic moments marked by a grim frustration and a kind of crushing resignation. Admittedly, these moments are also great acted and very well realized. Nevertheless, they make sure that a harmonious overall picture just doesn't want to emerge.

No question, Whiskey Tango Foxtrot is a good, in parts even very good film with a decent entertainment value. But what it doesn't offer its viewers is reality escapism. The audience is confronted with a topic that you can see on the news every day and that you actually want to escape from in the cinema. Since the film tries to draw a rather authentic picture of the work of war reporters in addition to the slightly exaggerated, satirical aspects of the story, it will have a hard time appealing to a broad audience despite its qualities. Because only a few want to spend money to see what already upsets and worries you in the cinema.

Who wants to get involved in the subject matter and can overlook the somewhat unbalanced tone of the production, however, gets a really good film, which is sometimes fun, sometimes upsetting and which also often makes you think. Not a flick to turn off completely, but great acted and cleverly written entertainment. And for that, despite all reservations, there is a clear: Worth seeing!