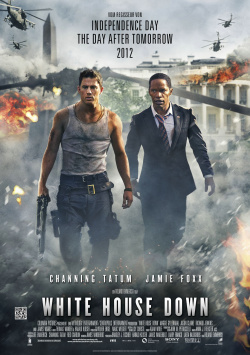 After having already reduced the White House to rubble in Independence Day and 2012, Roland Emmerich now returns to this symbolic building with his latest film White House Down to cause a third time a lot of chaos and destruction. This is neither particularly original, nor even remotely sophisticated. But the action thriller is still a lot of fun.

The plot that connects the individual action sequences revolves around police officer John Cale (Channing Tatum), who wants to impress his daughter Emily (Joey King) by taking a job as a bodyguard for President James Sawyer (Jamie Foxx) with the Secret Service. But unfortunately, the job interview with Agent Finnerty (Maggie Gyllenhaal), who John remembers from before, doesn't go very well. And so John has to teach his daughter that he's not going to be the big hero he wants her to see him as. To wrap up this bad news in a more pleasant way, the cop spontaneously joins his daughter on a tour of the White House. But now, of all times, the building that is considered the safest house in the world is stormed by a paramilitary group and all those who could not escape or have already been shot are taken hostage. The US is heading for a disaster of global proportions that only one man can now stop: John Cale!

After taking it easy with his last film, Anonymus, Roland Emmerich returns to what he does best in White House Down. He gleefully celebrates explosions, car chases, plane crashes and duels, spices up the action with a pinch of humour and a lot of pathos and sometimes even defies the laws of gravity and logic. This mixture always works especially well when the film doesn't take itself too seriously and wants to be fun in the first place. Then it is easy for the viewer to shut down the brain so far that the reach for coke and popcorn is still possible, and to be carried only by the high entertainment factor through the film.

However, there are also some scenes in the film with over two hours a little too long, which tarnish the otherwise quite positive overall impression a little. Whenever the characters behave completely stupidly, contrary to any spark of common sense, or even when the overly clichéd father-daughter conflict dominates the action, the satisfied grin that the over-the-top action puts on the face of fans of cultivated popcorn cinema turns into annoyed eye-rolling. When it all culminates in a finale bloated with patriotic pride, it's just too much of a good thing.

Nevertheless, of the two assaults on the White House that have played out in theaters this year, Emmerich's battle of the material is definitely the more entertaining. Admittedly Gerard Butler was allowed to get a bit rougher in the really very similar Olympus has fallen, which should please friends of the more solid action better. But with Roland Emmerich it is simply bigger, more fun and more self-deprecating. Especially the duo Channing Tatum and Jamie Foxx makes it almost a classic buddy action comedy in its best moments, which is certainly not particularly original, but just really entertaining. The special effects can't match Emmerich's doomsday scenarios from 2012 or The Day After Tomorrow in terms of scale, but they still provide plenty of fodder worth watching for the inclined eye. In that respect, simply no one is fooling the Swabian import.

Now, what the reason is that the film flopped badly in the US can't really be pinpointed. The film is certainly better than some other flicks that have grossed much more money this summer. And even if you feel like you've seen the whole thing before, White House Down is never really boring. Therefore, movie fans who like popcorn entertainment of the simple-minded, yet extremely effective kind, should not be negatively influenced by the prophecies of doom coming out of America. Roland Emmerich has once again succeeded in making great fun cinema, which perhaps doesn't deliver any particular depth, no sophisticated dialogues and also no really big surprises. But if you just want to spend two entertaining hours in the cinema, in which it crashes again and again, you will get your money's worth. And for that there is an absolutely satisfied: Worth seeing!

Cinema trailer for the movie "White House Down (USA 2013)"
Loading the player ...