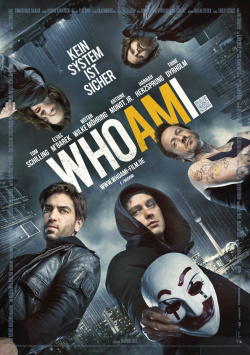 Who am I - No system is safe

When it comes to programming language, Benjamin (Tom Schilling) is a true professional. But when it comes to communicating with real people, he has always failed miserably. Even at school he was always invisible to the others, an insignificant nobody in fact. But that seems to change when he meets the charismatic Max (Elyas M`Barek). The two young men are complete opposites, but they share one passion: hacking. When Max recognizes Benjamin's talent, he introduces him to his friends Stephan (Wotan Wilke Möhring) and Paul (Antoine Monot, Jr.). Although at first glance they can't understand what Max sees in the shy boy, Benjamin quickly manages to win their respect. Without further ado, the four found the hacker group CLAY, which soon becomes a sensation on the Internet with provocative fun actions. But with MRX, the hacker idol of Max and Benjamin, they reap only derogatory comments. In order to finally win MRX's respect, CLAY plan a daring action at the BKA. But a small mistake quickly turns the fun into seriousness and not only Europol under the leadership of cybercrime investigator Hanne Lindberg (Trine Dyrholm), but also much more dangerous opponents attach themselves to the heels of CLAY.

Who am I - Kein System ist sicher may rightly be called the biggest and most positive surprise of German cinema in 2014. Director Baran bo Odar, who last thrilled with the great thriller The Last Silence, proves right from the stylish opening credits that he wants to play on an international level with his cyber-thriller. And he succeeds really well. For once, he is a German director who seems to have visually recognized the difference between great cinema and television drama and acting between theater stage and cinema screen. And he shows that German cinema can be clever and entertaining at the same time. Great actors, superb camerawork and a soundtrack perfectly matched to the images make Who am I perfect entertainment cinema with plenty of suspense, wit and plenty of pace.

Baran bo Odar makes no secret of the fact that films like Fight Club served as a source of inspiration. But even though there are some recognizable parallels to that and other films, the whole thing never feels like an uninspired rip-off. That's because the director very cleverly plays with the audience's expectations created by imposing comparisons to other films. Whenever you're tempted to say "That's just like XY", Baran bo Odar steers the action in a new direction. Even if the final resolution could have been a little less explanatory, the film leaves an extremely positive overall impression.

In addition to the cleverly constructed story, the ingenious editing and the atmospheric camera work, the actors are of course also responsible for this. Tom Schilling delivers an extremely nuanced performance that is absolutely on par with his multi-award winning performance from Oh Boy. Elyas M`Barek turns Max into an extremely interesting character and Wotan Wilke Möhring shows that he can be convincing even when he is cast a little against his type. And also Antoine Monot, Jr. and Hannah Herzsprung are a real enrichment for the already first-class ensemble. Only the Dane Trine Dyrholm (The Feast) remains a little pale in direct comparison. On the other hand, her slightly wooden performance fits well with the Europol investigator she embodies, which is why there's nothing really to complain about here either.

Who am I - No System is Safe is perfect cinema entertainment. Cool, clever, exciting, amusing and not boring for a second. Let's hope that now also the audience recognizes the high quality of the cyber thriller and the film is granted the success it deserves. That's why I give it a more than deserved: Definitely worth seeing!

Cinema trailer for the movie "Who am I - No system is safe (Deutschland 2014)"
Loading the player ...