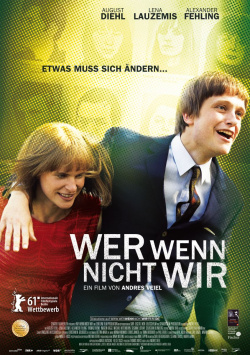 Who if not us

Andres Veiel, director of such acclaimed documentaries as "Die Spielwütigen" or "Black Box BRD", tells the story of Bernwald Vesper (August Diehl), son of Nazi writer Will Vesper (Thomas Thieme), in his feature film "Wer wenn nicht wir", who, inspired by his studies with scholars such as Walter Jens, feels called to become a great poet himself. He wants to shake up society with his words, wants to make a difference. While studying in Tübingen, Bernwald also meets and falls in love with Gudrun Ensslin (Lena Lauzemis) - the beginning of an extreme love affair that drives Bernwald into drug madness and Gudrun Ensslin into the terrorist underground.

What may seem like the prequel to "The Baader Meinhof Complex"is, on closer inspection, a completely independent work that clearly places the characters in the foreground. While the historical background also plays an important role, it is reflected in the actions of the protagonists and the developments of their characters rather than conveyed through specific events depicted. Of course, the viewer is provided with a lot of information about the political situation in the 60s, and Veiel's background as a documentary filmmaker comes in handy here. This is because the individual acts of his story are connected by documentary footage, accompanied by a great 60s soundtrack.

Through this form of staging Veiel manages on the one hand to create an authentic picture of the 60s and to provide the viewer with information that is important for the story, but at the same time to give his characters enough space to develop - something that was rather lacking in the "Baader Meinhof Komplex". It also allows the performances of the actors to be better appreciated. August Diehl portrays the downward spiral in which Bernwald Vesper is caught strongly and absolutely credibly. However, the film is primarily carried by the engaging performance of Lena Lauzemis, who turns Gudrun Ensslin into a very complex character. The only criticism that can be levelled at Lauzemis is that she owns the audience's sympathies for too long, which of course doesn't help what takes centre stage in the final third of the film.

"Who if not us" is a strong drama that tells a moving love story without false nostalgia and with a strong cast that is not certified a happy ending from the start. It is a political, but at the same time deeply human film. An arthouse drama that tells of a country before its political upheaval. A film that seems particularly topical right now and that's exactly why it's well worth seeing despite small lengths!

Cinema trailer for the movie "Who if not us (Deutschland 2011)"
Loading the player ...