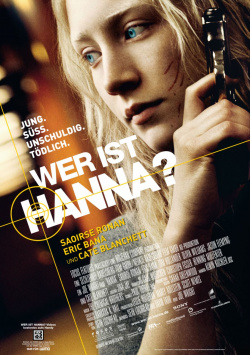 The role of the young Briony Tallis in the bestselling film Abbitte by Joe Wright brought the then 13-year-old Saoirse Ronan in 2007 immediately several awards and nominations, including the Oscar, the BAFTA Award and the Golden Globe. So it's no surprise that Wright has decided to team up with Ronan again for his latest film, and she also gets to prove herself as an action heroine in Who's Hanna?"

For years, Hanna (Saorise Ronan) has lived with her father (Eric Bana) in the isolated wilderness of Finland. Here, Hanna has learned not only different languages, but also combat and survival skills. But one thing Hanna doesn't know is who she really is. When she feels ready to break out of her isolation, her father, a former CIA agent, sends her on a mission that takes Hanna across Europe to Berlin. Pursuing her are Marissa (Cate Blanchett), Hanna's father's former boss, and hitman Isaacs (Tom Hollander), who are determined to prevent Hanna from learning more about her past. But the closer the girl and her pursuers get, the more Hanna learns about her origins and stumbles upon a shocking truth.

With Who Is Hanna, Joe Wright ventures into previously uncharted territory after such dramas as Pride and Prejudice, Abbitte, and The Soloist. His latest work is a mixture of drama, thriller, action and mystery, mixing elements from films like Nikita, The Bourne Identity or Salt with set pieces from TV series like The X-Files or Alias. The whole thing seems a bit overloaded and half-baked here and there. While some of the pieces work very well, in the end not all of the pieces fit together. Nevertheless, Joe Wright's action thriller has definitely become a good film.

Because the positive aspects clearly triumph over the weaknesses. First and foremost is Saoirse (read: Sier-shä) Ronan's convincing performance. Both in the action sequences, but also in the scenes in which Hanna learns things of simple teenage life on her journey through Europe, Ronan (In My Heaven) delivers a great performance, proving that her 2007 Oscar nomination was not undeserved. But the delightfully over-the-top performance of Tom Hollander (Pirates of the Caribbean 2 + 3) as a whistling killer with very idiosyncratic fashion tastes, the hard-hitting performance of Eric Bana and the ice-cold acting of Cate Blanchett also contribute greatly to the film's success.

The symbolism used more and more, especially towards the end, the ethical questions the film raises at the end and the many rather quiet moments ensure that Who Is Hanna? is not necessarily crowd-pleasing. True, the numerous action sequences, including a truly great fight between Eric Bana and some assailants in a Berlin subway station, can certainly find great favor with all fans of popcorn cinema. However, fans of lighter mainstream entertainment might be more bothered by the other aspects of the film, though that doesn't make it any less worth watching. If you're expecting a smash hit like Salt here, you'll be disappointed for sure. But if you are looking for an original action movie with cleverly placed mystery elements, good actors and a not uninteresting message, you should definitely investigate the question of who Hanna really is. Worth seeing

Cinema trailer for the movie "Who is Hanna? (USA/Deutschland 2011)"
Loading the player ...