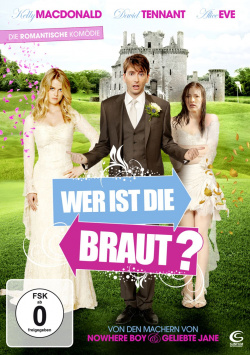 Film: Actually, the celebrated actress Lara (Alice Eve) has dreamed of a big wedding with her fiancé, the writer James (David Tennant). However, the intrusive paparazzi, especially the photographer Marco Ballani (Federico Castelluccio) with all the water washed, make a proper thwart the superstar. Lara realizes that if she wants to have a quiet wedding without the pesky press, the ceremony must take place in absolute seclusion. The Scottish island of Hegg, described by James in his novel, seems the perfect place. After all, Lara fell in love with the unassuming man after reading the book. Too bad James himself has never been to Hegg, and the island turns out to be considerably less romantic than first thought. To make matters worse, Ballani shows up on the island. Now it's imperative to create a diversion to throw the paparazzi off the scent. Katie (Kelly Macdonald), the only bachelorette on the island, seems to be the perfect candidate. And so James unexpectedly stands at the altar with a complete stranger - chaos is naturally inevitable.

Who's the Bride is a nice romantic comedy based on a screenplay by Smack the Pony and Bridget Jones actress Sally Phillips, who of course also took a small part in the film herself. With likeable characters and the wonderfully rugged landscape of the Isle of Men, where much of the filming took place, this amusing romp has decent entertainment and spectacle value. Especially the life on the fictional Scottish island of Hegg and its sympathetically quirky inhabitants has been drawn by director Sheree Folkson in a very amusing and endearing way. What her production lacks in some scenes, however, is comedic timing. Especially in the word fights between James and Katie some moments seem too cramped and tried too hard, which is admittedly amplified by the German dubbing.

In addition, the successful, original funny ideas and the all too predictable genre clichés keep the balance quite evenly. So the viewer is entertained overall well, but more than a nice pleasure offers the film bottom line not - and that, although there is definitely potential for more. Because besides the beautiful scenery Sheree Folkson also had very good actors at her disposal. Besides Doctor Who David Tennant, who seems a bit too emaciated here, and the always charming Alice Eve (Men in Black 3, Too Hot to Be True), especially Kelly Macdonald inspires with a lot of charm and naturalness. Macdonald, who is currently part of the cast of the award-winning TV series Boardwalk Empire, carries the film even in its more bumpy moments as an islander who actually expected more from life and has just returned to her homeland in remorse. Especially the little scenes between Katie and her boss William, played by James Fleet (Four Weddings and a Funeral), who pines for her, are just so likeable that you gladly overlook the fact that many a gag comes to nothing.

So, on balance, despite some minor flaws, Who's the Bride is a nice, charming film that has enough positive aspects to offer that lovers of romantic comedies will be well entertained here for just under 90 minutes. If you are looking for harmless entertainment with some very amusing ideas, this is the right movie for you. Worth seeing!

Image + Sound: The images captured in Scotland and on Isle of Men come across well on the DVD thanks to a coherent colour scheme and decent overall sharpness. The sound is primarily driven by the dialogue and music, though here and there ambient sounds such as the sound of the sea or the whistling wind add a bit of movement in the surrounds. Overall, it's noticeable that the DTS track is noticeably more powerful than the Dolby Digital 5.1 mix and that the dialogue on the German soundtrack seems a bit more front-heavy and less harmoniously integrated into the proceedings than is the case with the English track, which is a bit weaker overall. The bottom line, however, is a completely satisfactory for this genre: Good!

Extras: A short cut scene (approx. 1 min.) and an uncommented look at the special effects used in the film (approx. 2 min.), together with the trailer for the film and other programming tips from the provider, make up the DVD's complete bonus material.

Conclusion: Who's the Bride is a nice romantic comedy that thrives on its likable cast and the picturesque rugged scenery of Scotland. Despite a few somewhat bumpy scenes where the comedic timing just doesn't want to work, the film leaves a very positive impression overall. Friends of the genre can access this DVD, which presents the film in good technical implementation, so confidently. Recommendable