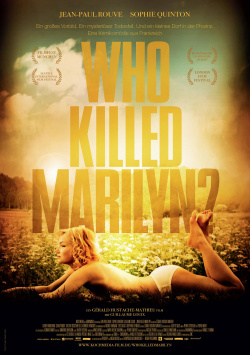 Even fifty years after her death, the myth of Marilyn Monroe has lost little of its fascination. French filmmaker Gérald Hustache-Mathieu has now found a very original way to approach this myth without directly making a film about the screen goddess. In Who Killed Marilyn, he tells the story of crime writer David Rousseau (Jean-Paul Rouve), who has actually only come to the remote province of France to accept the inheritance of his recently deceased uncle. But then he comes across a very special story in snowy Mouthe, a small town famous for its cheese: the murder of village beauty Candice Lecoeur (Sophie Quinton), whose body is found somewhere in no man's land outside Mouthe. For David, who suffers from writer's block, this is the perfect material for his next book, as he discovers during his research that the popular weather forecaster bore a strong resemblance to Marilyn Monroe, and not just in appearance. But the more intensively the writer deals with the alleged suicide, the more dangerous his stay in the cold town becomes. Because apparently, SOMEONE wants to stop David from finding out the truth about Candice's death by any means necessary...

After a beguiling beginning that shows Sophie Quinton in poses modeled after a very famous Marilyn photo shoot, Gérald Hustache-Mathieu launches into his story in a very humorous way. The way David is confronted with all sorts of quirky small-town characters, the way he tries his hand at being a private detective initially out of sheer boredom that increasingly turns into obsession, and the way the clashes between Candice's life and Marilyn's fate are built up, all lend the film its very special charm. Coupled with the barren landscape of snowy French nowhere, Who Killed Marilyn in its best moments even reminds us of cult films like Fargo. But this is probably the problem that the film has to struggle with.

Because it has some great moments and original ideas that force a comparison with works like Fargo, the less successful moments are all the more important. And unfortunately, especially in the second half of the movie there are quite a few scenes that aren't really bad per se, but almost seem trivial in the immediate vicinity of the so successful parts of the production. So a not always balanced picture arises at the end, which is predominantly positive, but which ultimately reveals more potential than is exploited on balance.

However, even if this may sound a bit negative now, this shortcoming is by no means a reason to discourage a visit to the cinema. Because in the end the positive aspects clearly outweigh the negative. Jean-Paul Rouve is absolutely convincing as the amateur criminologist with a performance that skilfully balances between comedy and drama. And Sophie Quinton also leaves a very good and thoroughly beguiling impression as small-town Marilyn. The rather restrained, but in some moments very effective humor and the way Hustache-Mathieu repeatedly incorporates familiar motifs, moments or pieces of music from Marilyn Monroe's life/repertoire into his story, make this crime comedy an entertaining and amusing cinematic pleasure, despite small weak points. If you like French cinema and humorous crime stories, you can safely take a look. Worth seeing

Cinema trailer for the movie "Who killed Marilyn (Frankreich 2011)"
Loading the player ...