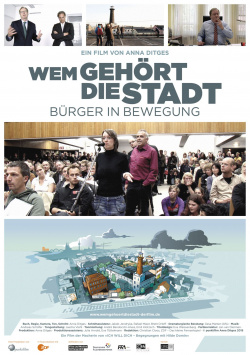 Who owns the city - citizens on the move

The image of a city is constantly changing. There must be constant adaptation to the needs of residents and the economy for a city to function as a place to live, a place to work, and an economic engine. The accompanying changes are not always pleasant, but often necessary. However, it becomes problematic when the (financial) interests of a few are placed above the needs of many. The buzzword here is gentrification - a problem that most large cities have to contend with, and not only in Germany. An example of this is the Ehrenfeld district of Cologne, which is threatened with drastic change when the Helios site, a former industrial area, is to be redeveloped. A shopping mall is to be built where clubs and concert halls, workshops and creative offices have so far shaped the image of the district. For the people of Ehrenfeld, the area is one of the last alternative living spaces that must be preserved at all costs. And so an enormous protest is forming against the plans of the major investors. The result is a citizen participation process that is supposed to ensure that the interests of business and politics are protected just as much as those of the citizens.

Filmmaker Anna Ditges accompanied the work of the citizens' initiative and the events surrounding the neighborhood with her camera for two years. The result is Wem gehört die Stadt (Who owns the city), an entertaining and interesting documentary that is on the one hand an engaging portrait of a special Veedel, but on the other hand also a very universal story about democracy in everyday life, protest and bureaucracy. Although the people of the neighbourhood are at the centre of the film and the audience's sympathies clearly belong to them, Ditges does not make it so easy for herself to take a clear position and portray the investors who want to bring change to Ehrenfeld as evil personified. Rather, her film is concerned with representing both sides and showing what problems can arise in attempts to bring these two sides together - and what surprising solutions can emerge from them.

It is simply extremely interesting to learn about the aspects that have to be taken into account in such planning, how much the desirable and the feasible sometimes differ from one another, what compromises have to be made in order to reach the goal, and how much bureaucracy can thwart any form of movement in the right direction. The processes that Ditges traces here can easily be applied to any large city. Thus Wem gehört die Stadt (To Whom Does the City Belong) is by far not just a film about Cologne, but a film about life in German cities in general. The fact that such a topic, which rightly continues to heat up the minds of concerned citizens, is presented in such a factual and yet entertaining way, in such a sympathetic and easily accessible manner, makes the film absolutely worth seeing for all friends of first-class documentaries and for all those who are generally interested in the topic!

Cinema trailer for the movie "Who owns the city - citizens on the move (Deutschland 2014)"
Loading the player ...