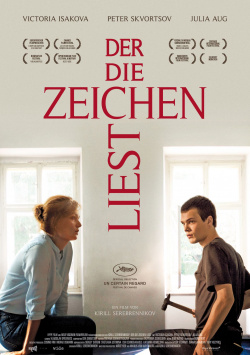 Who reads the signs

The student Benjamin (Petr Skvortsov) is convinced: society is corrupt. True redemption is offered only by the Bible. His views are initially ridiculed when he refuses to attend swimming lessons on religious grounds. But the more Benjamin rebels against his environment, the more aggressive he becomes in his actions. And this does not remain without consequences: He drives his divorced mother (Julia Aug) mad with his accusations and the school administration increasingly buckles before him. Girls are no longer allowed to wear bikinis to swimming lessons, but only bathing suits, and condoms are banned from bio lessons. Benjamin seems to dazzle everyone with his religiously motivated protest - only a young teacher (Victoria Isakova) resolutely stands in his way.

In He Who Reads the Signs, Kirill Serebrennikov presents a bitterly wicked and highly charged drama that reveals the destructive and dangerous force that emanates from religious fanaticism - no matter what faith. With biting humor and some truly disturbing moments, the film also makes it painfully clear that the danger comes not only from the fanatics, but also from the way their environment reacts to them. And here it becomes clear what makes the whole problem so difficult: there seems to be no solution. To cave in to the fanatics out of misunderstood tolerance, as Benjamin's teachers do, is absolutely wrong. But firing back with almost equal aggression, as his atheist teacher does, doesn't help either - on the contrary. If anything, it leads to an even more radicalized fanaticism.

Even though Kirill Serebrennikov very skilfully combines humorous as well as dramatic moments and thus provides a pleasantly biting lightness in places, the production seems extremely depressing precisely because of the illustration of the apparent powerlessness in the face of religious fanaticism. As amusing as the scene in which Benjamin's mother seeks advice from the church is due to its satirical undertone, its realism also makes one despair and a bit angry.

But precisely because of this, the film also accomplishes something that makes it an enormously important work right now: it encourages reflective thought and discussion. And it makes one thing clear that too many unfortunately keep forgetting: a radical interpretation of religion is not limited to one faith. It can be found everywhere, unfortunately. No matter if a religion is peaceful at its core, fanaticism always makes it dangerous. He Who Reads the Signs shows this in an intelligent, entertaining, but also disturbingly oppressive way. Even if the film doesn't offer any solutions, it encourages a really important rethinking of common patterns of behaviour in our society. And that's why there's a very clear: Worth seeing!

Cinema trailer for the movie "Who reads the signs (Russland 2016)"
Loading the player ...