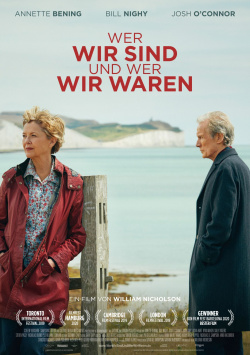 Who we are and who we were

For almost three decades, Grace (Annette Bening) and Edward (Bill Nighy) live together as a married couple. Their everyday life in a picturesque seaside town in the south of England is an unexciting routine that really doesn't look like marital bliss. And yet a world comes crashing down for Grace when Edward leaves her for another woman. Yes, he got on her nerves with his whims and yes, passion was not to be felt between the two for a long time. But Grace isn't about to give up on her husband without a fight. Caught in the middle of his parents' emotional chaos is son Jamie (Josh O'Connor), who rarely shows up to see them anymore. But as he realizes what his parents' separation means, he too becomes more involved in their lives again - whether he wants to be or not....

With "Who We Are and Who We Were" director William Nicholson delivers a very quiet, yet intense marriage drama that very well illuminates both sides of the end of a long-term relationship. On the one hand, as a viewer you can very well understand why Edward wants to end the marriage, why he felt unhappy and no longer loved at Grace's side. On the other hand, it's equally understandable why his wife is so tremendously hurt and in danger of breaking from being thrown into being alone completely unprepared - even though she didn't really seem happy in the marriage either.

The audience sort of takes Jamie's position. He knows that his parents weren't really happy together. After all, that's what happened to him, which is why he only comes home when he really needs to. At the same time, of course, he doesn't want his parents to suffer. He seeks to talk to his father and tries to help his mother. Nicholson tells all this very unagitated and without exaggerated emotions, but that's what makes the drama really work. Because if he had laid it on too thick, especially on the emotional level, the film could easily have become very cheesy and unbearably weepy.

But as it is, the whole thing is extremely true to life. And Grace, in particular, brings to light something that many who have been dumped before have faced themselves: the painful realization that the breakup probably hurts more because of hurt vanity and a forced change than actually because of the loss of a supposed loved one. In the end, as is often the case in real life, there is sorrow, but also a lot of hope. This makes "Who We Are and Who We Were" far from pure feel-good cinema, but at least a powerful, superbly acted drama in which you can definitely find yourself. Worth seeing!

Cinema trailer for the movie "Who we are and who we were (Großbritannien 2019)"
Loading the player ...