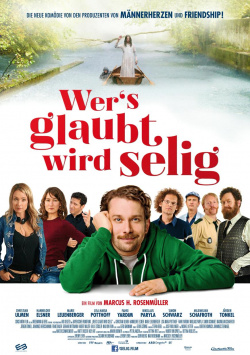 When Georg (Christian Ulmen) from Hamburg fell in love with the landlady Emilie (Marie Leuenberger) during his skiing holiday in the Bavarian Hollerbach a few years ago and swapped the sea for the mountains for her, it seemed like heaven on earth. But in the meantime the rosy times are over. For years, the snow and with it the tourists have been absent. And as if that wasn't bad enough, Georg and Emilie's love life is also at a standstill, as his extremely religious mother-in-law Daisy (Hannelore Elsner) knows perfectly how to nip any nascent passion between the couple in the bud. But then the exhausting mother-in-law passes away. And this gives Georg a crazy idea: he wants to have Daisy canonised and thus turn the former ski mecca Hollerbach into a place of pilgrimage. This would not only make the coffers ring, but perhaps also give his marriage a new lease of life. In fact, Georg even manages to present his request to the Pope (Nikolaus Paryla) in person. But of course the church does not canonize anyone that easily. An examiner sent by the Vatican (Fahri Yardim) must first reveal three miracles for which Daisy is responsible. But even for this difficult task Georg already has a plan...

With Wer`s glaubt wird selig Marcus H. Rosenmüller, one of the currently probably busiest directors in Germany, once again presents a very original comedy, which, like his cinema successes Wer früher stirbt ist länger tot, is very Bavarian, but with its very special humor should also work beyond the borders of the Free State. Rosenmüller, who has revealed a tremendous creative range in recent years and most recently delivered a very unusual Bavarian history lesson with Sommer der Gaukler (Summer of the Jugglers), is not quite at the height of his creative powers and doesn't hit the mark with all his gags. But when his comedy about faith and superstition works, it works really well.

That's mostly the case in the more absurd scenes. The attempts by George and other Hollerbach residents to pull the wool over the eyes of the Vatican's auditor are undoubtedly among the film's highlights. Especially when it comes to slightly black humour, Rosenmüller reveals his great strength time and again. On the other hand, when pure slapstick is in the foreground, such as in Father Paolo's attempts to get from Rome to Hollerbach, the whole thing quickly becomes too silly to live up to the charm that is inherent in Rosenmüller's films. It is also this mixture of original, sometimes wonderfully wicked gags and rather flat claptrap that leaves a somewhat pale aftertaste in the end.

But even if Wer`s glaubt wird selig is not one of the best films by Marcus H. Rosenmüller, this Bavarian farce still has enough wit and show values to satisfy at least those viewers who were already amused by the director`s earlier films. And so I raise my measure and give the film still a guades Sehenswert!

Cinema trailer for the movie "A likely story (Deutschland 2012)"
Loading the player ...