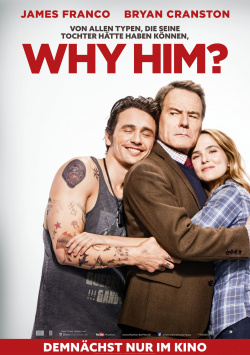 For Ned Fleming (Bryan Cranston), it's bad enough that his beloved baby daughter Stephanie (Zoey Deutch) is now a grown woman in a committed relationship with a man. But when he meets the ultra-rich Laird (James Franco), his worst nightmares come true. For the young millionaire is eccentric, loopy and very, very pushy. The fact that he has tattooed the Flemings' Christmas family portrait on his back in order to be part of the family is just the tip of the iceberg. Still, Ned puts up a good front. After all, he doesn't want to spoil this very special get-to-know-you weekend at Laird's estate for Stephanie. But when the eccentric boy asks him for his daughter's hand in marriage, Ned's fuses blow. Because of all things, he definitely doesn't want this young man as his son-in-law.

Why Him? is another one of those comedies where the script's weaknesses are supposed to be concealed by throwing in as many penis jokes as possible and presenting a few oh-so-shocking gags - which really aren't shocking after the umpteenth rehashing. The story that director John Hamburg (.And Then Came Polly) came up with, featuring Jonah Hill and Ian Helfer, does have some funny moments, which Bryan Cranston in particular also delivers wonderfully. And it's also amusing how self-deprecatingly it handles the fact that a plot element was stolen directly from the Inspector Clouseau films with Peter Sellers. It's moments like this that keep the comedy from descending to Dirty Grandpa levels.

It's still a shame that the inherently good actors and what is, at its core, a very funny story are so watered down by worn-out zingers and lame adolescent humor. There are always moments where you can actually laugh heartily. But every good laugh is followed by flat gags and moments of being embarrassed, where the viewer can only roll his eyes in annoyance. Even with the target audience, which is actually served here really neatly, should have set slowly but surely an oversaturation of such gags around bodily fluid and male genitals.

When at the end then again the family morality club is swung and the kitsch cannon is fired, then this is not only enormously predictable, but just boring. Still, Bryan Cranston alone as the father on the verge of a nervous breakdown makes even some pretty lame scenes bearable and thus raises the entertainment value just above the belt. No real comedy highlight, but at least better than many other zoten-disaster, which was seen in our cinemas in recent months. And therefore, for such viewers who like it a little more crude and love family comedy in the style of My bride, her father and I, there is still a proper: worth seeing!