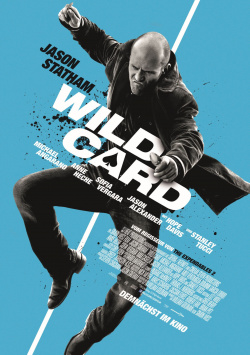 It's quite a vice with gambling addiction. Although former mercenary Nick Wild (Jason Statham) comes very close on more than one occasion to turning his dream of emigrating to Corsica into a reality, he keeps gambling away his just-earned winnings. And so he must continue to fight his way through the now hated Las Vegas with odd jobs as a detective and bodyguard. When one day his ex-flame Holly (Dominik Gracia-Lordio) asks him for help after she has been badly beaten up by the ice-cold gangster Danny DeMarco (Milo Ventimiglia), Nick's fuses blow and he starts a vendetta that humiliates DeMarco in the worst possible way. Of course, the young mobster doesn't take this lying down. He blames Nick for two murders and sends his best men after him. High time to really leave the city now. But to do that, Nick first needs the chance to win enough money - and the good sense not to gamble it away again straight away. And that is easier said than done with a gambler like Nick Wild.

Wild Card is the film adaptation of the novel Heat by William Goldman, which was already released in 1986 with Burt Reynolds in the leading role as Heat - Nick, the Killer. The somewhat modernized version, written by Goldman himself, is the third collaboration between director Simon West and lead actor Jason Statham, following The Mechanic and The Expendables 2. But anyone expecting fast-paced action fireworks, especially given the two previous collaborations, is likely to be pretty disappointed with Wild Card. Sure, there are some very good action interludes, in which the film then works really well. When Statham lets his fists do the talking, he's simply better than in the film's more dramatic moments, which dominate large stretches of the pleasantly tight running time.

Watching Statham gamble for minutes on end or drive around Las Vegas on numerous occasions isn't particularly exciting, unfortunately. It's true that West repeatedly tries to spur the action with a bit of humor, a dash of cool, and some atmospheric imagery. But the spark just doesn't want to jump over. That doesn't make the movie bad. There are just too many good moments, like the much too short appearance of a great Stanley Tucci or the tough fight in Danny DeMarcos hotel room. However, despite these good moments, the whole thing feels quite inconsequential and stale overall.

For an entertaining DVD evening, Wild Card may have enough entertainment value. After all, even in his weaker films, Jason Statham is still one hell of a cool sock. And the fight scenes are really well choreographed, so that in a few minutes there is a very high entertainment factor. But to justify a visit to the cinema, it's just still way too little. And so, despite some good show values and convincing actors, in the end there is also only one: With clear deductions for Statham fans quite still worth seeing!