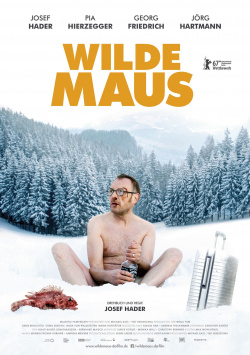 For decades Georg (Josef Hader) was the music critic for a major Viennese newspaper. For his expertise and relentlessly honest reviews, he was as esteemed as he was feared. But that's over now. For his editor-in-chief (Jörg Hartmann) Georg is simply too expensive. In the course of drastic cost-cutting measures, he is unceremoniously demoted. Since he doesn't want to admit to his wife Johanna (Pia Hierzegger) the shame of his dismissal, he now spends his involuntary early retirement in the Prater during the day and at concerts in the evening. Outwardly he keeps up appearances - but inwardly he is seething and bent on revenge. He is backed up by his old school friend Erich (Georg Friedrich), whom he helps to restore a dilapidated roller coaster in the Prater. Soon Georg embarks on a vendetta that begins with minor property damage but threatens to get more and more out of hand.

Wilde Maus marks the directorial debut of actor and cabaret artist Josef Hader. For his first work behind the camera, he did not miss the opportunity to write the script and take the lead role. It is obvious from his performance that this black comedy is a real affair of the heart. The story about a big city man who is driven to the brink of madness by the pressure of always having to function perfectly - both at work and in love - and who fails miserably in doing so, offers actor Hader plenty of opportunities to shine with the very dry, brash humour for which audiences and critics alike have lived him for many years - both in the cinema and on stage.

Supported by a great ensemble, with Georg Friedrich in particular standing out once again, Hader offers his audience some delightfully wicked scenes, some wonderful dialogue full of dry wordplay, but also some moments of quiet contemplation. This makes the film a really good social satire, especially in the first hour, and a successful directorial debut. The only problem is that the script runs out of steam towards the end. The linking of the individual storylines, which then culminates in a confrontation that seems too contrived, just doesn't quite want to work. What has a perfect rhythm at the beginning and comes across as light-footed, despite its profundity, seems rather forced in the last act.

But even if the film deserved a more coherent ending, Wilde Maus can be called a successful comedy with bite and message. Watching the great Josef Hader play is always a pleasure, especially when he confronts us with the abysses of the human soul, as he does as Brenner in the Wolf Haas films, or here again in such a distinctive way. It is not a perfect film, but in any case one that shows that Josef Hader not only as an actor, but also as a director drives a very own track - and that has then, despite its weaknesses, also earned a very clear worth seeing!