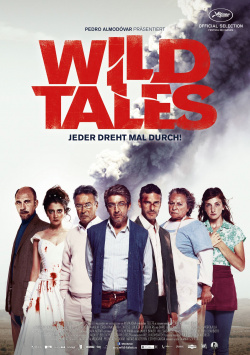 What do passengers on board an airplane, a fast food restaurant waitress (Julieta Zylberberg) dealing with an extremely unpleasant guest (C&eacute;sar Bord&oacute;n), a businessman (Leonardo Sbaraglia) who clashes with a chavvy provocateur (Walter Donado) on a country road, an explosives expert (Ricardo Dar&iacute;n) who is angry about his car being towed away, a heavily wealthy tycoon (Oscar Martinez) whose son has run over a pregnant woman, and a young bride (&Eacute;rica Rivas) who learns at her wedding that her husband (Diego Gentile) has been having an affair with a colleague, have anything in common? They all get into extreme situations where they act completely against their true nature. Not surprising, really, since everyone goes nuts!

Wild Tales - Everyone goes nuts! is an extremely quirky episodic film that hits the ground running with the opening episode. What happens in the first few minutes aboard an airplane, and the completely bizarre resolution this ends in, is hard to beat for original nastiness. But director Dami&aacute;n Szifr&oacute;n has many more weird ideas to offer, with which he drives his protagonists in six episodes to the brink of nervous breakdown. However, he also has to deal with the typical problems that can be found in almost every episodic film. Again, not all stories work equally well.

While the prologue is quite wonderful, the sprawling argument between two motorists is mighty fun even without many words, and a frustrated man's battle against the seeming arbitrariness of the traffic police culminates in magnificent anarchy, the final wedding episode is far too long and plodding. And the attempt of a wealthy man to save his son from prison, despite a good idea and some successful moments, is also one of the low points of the black comedy.

The situations Szifr&oacute;n confronts his characters with, as well as their reactions to them, are of course badly overdone. Nevertheless, the stories are very universal in their own way, which is why you as a viewer can definitely recognize one or the other situation and therefore also understand the extreme reactions. Especially because the film reacts to everyday annoyances beyond all rules of civil society, it's a lot of fun in a very gleeful way. Even if Wild Tales - Jeder dreht mal durch! is a bit too long at two hours and you could have done without the last episode, the comedy co-produced by Pedro Almodovar is absolutely worth seeing for lovers of nasty, politically incorrect comedy fare. Only for imitation, the nasty stories are admittedly not recommended!