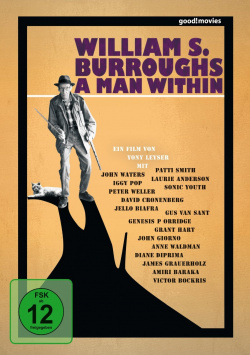 Film: With novels like "Naked Lunch" or "Junkie" William S. Burroughs (1914 - 1997), along with his companion Allen Ginsberg ("Howl"), became the leading figure of the Beat Generation and is today considered one of the most important American writers of the second half of the 2nd century. But Burroughs had and has not only admirers, but also harsh critics, who not only went to court with his artistic work, but also with the man William S. Burroughs. No wonder, since the artist, with his openly lived out drug addiction, his homosexuality or even the accidental shooting of his wife during the reenactment of the famous apple scene from "Wilhelm Tell", offered enough projection surface for criticism and hostility. However controversial William S. Burroughs may have been, his lasting influence on literature, film and music is undeniable.

In the documentary "William S. Burroughs: A Man Within" filmmaker Yony Leyser tries to get to the bottom of the phenomenon of William S. Burroughs. In doing so, he not only traces his curriculum vitae, but also deals with character aspects such as his passion for firearms. With the help of numerous interviews with friends, companions, and colleagues such as Patti Smith, Gus van Sant, David Cronenberg, Iggy Pop, and John Waters, a gripping portrait was created that, with numerous, in part very private, archive photographs, scratched more than just the surface of this exceptional artist. Whether in conversation with Allen Ginsberg, at dinner with Andy Warhol, or in extensive shooting exercises, Leyser's documentary succeeds in providing the viewer with an unprecedentedly intimate insight into the world of a man who at times has been just as disturbing and fascinating as the works that have sprung from his mind.

"William S. Burroughs: A Man Within" is a great example of how good documentaries should be: multi-layered, entertaining, illuminating, surprising and fascinating. Even if you are not familiar with the work of this American icon, you won't be bored for a second. So if you are interested in first-class portraits of artists and cultural documents of the time, you should definitely put this DVD on your shelf. Worth seeing!

Picture + sound: Since the documentation often makes use of archive material, the picture quality is accordingly sometimes more, sometimes less convincing. In the newer interviews, the overall picture is very clean and the sharpness is at a good level. The conversations also set the tone in the sound, which is why the stereo mix is completely sufficient here. Good!

Extras: The DVD has an impressive 78 minutes of bonus material to offer. In addition to three additional scenes, the extras also feature rare archive footage and home videos, excerpts of which have already been shown in the documentary. In addition, there is an excerpt (in very poor image quality) from a reading, the Burroughs in Münster from 1980, recordings of the celebration of the 50th anniversary of "Naked Lunch", as well as the first short film by director Yony Leyser. Except for the excerpt from the reading and the recordings of the anniversary celebration, all extras are optionally provided with German subtitles.

Fazit: "William S. Burroughs: A Man Within" is an interesting and informative documentary about a very complex personality. Especially the effects of Burroughs' work on film, music and literature and his position within the beat generation are worked out here in a very engaging way with the help of numerous archive material. This is also the source of the extensive bonus material that this DVD provides in addition to a real recommendation for anyone interested in the writer, recent American literary history or entertaining documentaries in general. Recommended!!