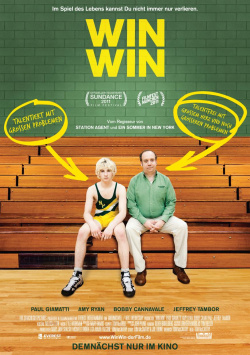 In a very short time, Paul Giamatti has delivered not one, but two stellar performances that have garnered much critical praise, but have received far too little attention from audiences. But even if both Barney's version and Tom McCarthy's Win Win can only encourage comparatively few moviegoers to buy a ticket, those who do choose to see one of these wonderful comedies will be rewarded with acting cinema of a particularly wonderful kind.

In Win Win, Giamatti plays unsuccessful lawyer Mike Flaherty, who is desperately trying to get out of his financial funk before his wife Jackie (Amy Ryan) catches wind of it. The fairly well-paid care of his client Leo (Burt Young), whom he nevertheless relegates to a nursing home despite his promises in court, initially brings the financial support he was hoping for. However, when Leo's nephew Kyle (Alex Shaffer) shows up one day and refuses to return to his drug-addicted mother Cindy (Melanie Lipsky), the scam threatens to blow up. To be sure, Kyle is a great support to the wrestling team that Mike coaches in a sworn capacity. But as a deep friendship seems to develop between Kyle and the Flahertys, and the boy also spends more and more time with his grandfather, it becomes increasingly difficult for Mike to lie to Kyle. When Cindy finally shows up, Mike is in danger of losing a lot more than just a good ringer.

Win Win is the third directorial effort from actor and filmmaker Tom McCarthy. Following the wonderful Station Agent and the tragicomedy A Summer in New York, McCarthy has once again succeeded in creating a wonderfully warm-hearted piece of American independent cinema with his latest effort. As in his previous films, Win Win is once again dominated by a very quiet, subtle sense of humor that mostly encourages smiles and rarely laughs out loud. This is in no way to be understood negatively, as the viewer leaves the cinema with a longer lasting positive mood, something many more brute comedies only manage to do to a certain extent. Because the film not only excites the laugh muscles, but also stimulates the heart - and that easily outweighs minor lengths or some scenes that don't work quite as well.

The charming script is carried by a wonderful ensemble of actors, led but not overrun by Paul Giamatti. Giamatti gives his co-stars Amy Ryan, Bobby Cannavale (who has previously appeared in McCarthy's Station Agent), Alex Shaffer and Jeffrey Tambor enough leeway in their slightly smaller roles to allow them to fully develop their acting skills. This is especially evident in the few scenes that feature the great Burt Young (Rocky). Giamatti acts no less convincingly alongside Young, but he allows the veteran star to dominate each scene with just his face and a few words.

It's hard not to like a movie like Win Win. Assuming, of course, there's a certain fondness for American arthouse comedies. Sure, the characters are perhaps a little too endearing to seem truly real, and the ending is almost fabulously naive. But that's also where the film's charm lies. Even though there are many sad aspects in the story - Cindy's drug addiction, the treatment of old people, the economic situation of the American middle class - McCarthy wraps them up in an extremely light, life-affirming mood. This, coupled with the wonderful actors, makes Win Win a perfect feel-good film, for which only one verdict can apply: absolutely worth seeing!