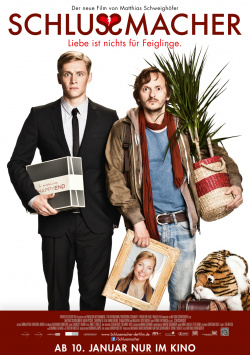 Matthias Schweighöfer knows what his fans like. After he was able to celebrate success in recent years, especially in the metier of romantic comedy, not only as an actor, but also as a director with What a Man, he remains true to this recipe for success again with his second directorial effort Schlussmacher. However, this time he relies much more on raunchy humour than on his charm and humorous story, which unfortunately does lasting damage to the entertainment value.

The story, even if it seems to be cribbed together from various films such as The Hired Lover or Hitch, is really amusing and promising: Paul Voigt (Schweighöfer) has an unusual profession: he is a professional break-up artist. Working for a Berlin breakup agency, he teaches his clients' soon-to-be exes about their desire to break up. Day after day, he watches relationships break up, which has left him extremely emotionally jaded. No wonder, then, that he can't give his girlfriend Natalie (Catherine de L&eacute;an) the closeness she craves. But Paul can't worry about his personal life at all right now, as he's about to become a corporate partner. In one week, Paul has to complete eleven separations, then he is certain of promotion. But then he has to tell sensitive Toto (Milan Peschel), of all people, that his girlfriend Kati (Nadja Uhl) wants to break up with him. And Toto just can't cope with that. He never leaves Paul's side and even accompanies him on his business trip across Germany. And what was supposed to be an easy road to professional success quickly turns into a horror trip for Paul, at the end of which he could find himself without a job and without a girlfriend.

Schlussmacher begins with some very amusing moments showing Paul at work. In the process, Schweighöfer also once again reveals his knack for mixing good comedic timing with appealing visuals. His second film also simply looks good and can easily keep up with many international productions with its good camera work and coherent editing. In addition, some very good actors could once again be lured in front of the camera, with Milan Peschel in particular once again proving his versatility.

So Schlussmacher would have definitely had what it takes to be a really good German comedy. But Schweighöfer unfortunately makes two mistakes that stand in the way of this outcome. The first mistake is the overly excessive use of platitudinous jokes, which the film really didn't need. Sure, What a Man didn't necessarily excel at intellectual wit either, and some of the gags Schweighöfer makes use of in his second directorial effort work just fine. But too often the humor aims below the belt or uses completely over-the-top fat and fecal jokes to make the audience laugh. But since especially at the beginning it becomes clear that the initial idea of the story offers the potential for much better gags, which is then almost completely given away, it's just a pity. Then also the high sympathy value of the actors helps only little to iron out this shortcoming.

The second disturbing factor is the lack of any subtlety. This is especially evident in the far too intrusive use of the film's score, a bad habit Schweighöfer seems to have picked up from his colleague Til Schweiger. Whereas in What a Man he showed more restraint in this respect, in Schlussmacher he goes all out. In some scenes it seems as if the actors are screaming against the music, which in turn gives the impression that the audience should be made aware of the gag shown in this scene. Yet, some restraint would have been good for the movie, especially in such moments. Because even if the laughs then turn out a little quieter, so in the end remains a much more positive impression than when the humor is presented virtually with the sledgehammer.

No question, fans of Matthias Schweighöfer will also enjoy Schlussmacher. Because the actor tries through various fan events or social networks to be as close as possible to his audience and thus also find out what his audience wants to see. And that's what he delivers again with his second film, with a few cutbacks. But even if the comedy will thereby satisfy its target audience, in the end the unpleasant feeling remains that Schweighöfer has more or less given away his talent, which he has impressively demonstrated several times in the past, here. At least: for Hessian fans of the actor there are again some nice shots of Frankfurt and a really delicious guest appearance of Badesalz to see. This is not enough to hide the clear weaknesses of the film. But it is a nice consolation. Therefore: only for Schweighöfer fans really worth seeing!