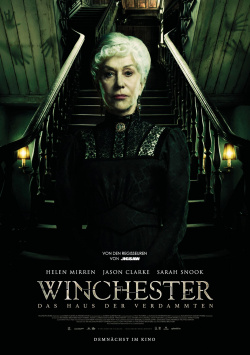 Winchester - The House of the Damned

The board of Winchester is thorn in the side of widow Sarah Winchester's (Helen Mirren) eccentric goings-on. After all, the heiress to the gun empire claims the mansion she's had built for decades is haunted. Psychologist Dr. Eric Price (Jason Clarke) is hired to spend time at the mansion investigating Sarah's mental state - in hopes of removing her from business management. At first, of course, the doctor doesn't believe a word of what the widow tells him. But the more time he spends in the gigantic estate, the more he has to admit to himself that all is really not right here. But are the tortured souls of the dead really at work here?

After Jigsaw, Spierig brothers Michael and Peter switch from gory horror to more dignified creepiness with Winchester - The House of the Damned. With the great set in what is probably the most famous house of all fans of the supernatural, the directing duo clearly wanted to pay tribute to the classics of scary movies. Here and there they actually succeed quite neatly in creating a little bit of goosebumps with traditional means. And with Helen Mirren they managed to get a great leading actress, who is known for delivering good performances even in weaker films.

But apart from that, the story, which is very loosely based on true events, is pretty rubbish. Not only the screenplay, but the whole production seems badly uninspired and bristles with clichés, thin dialogues and boring predictability. Unlike, say, the really successful Conjuring movies, this one barely manages to build any real suspense. Yes, now and then the whole thing is very atmospheric and one or two good scary moments the ghost fairy tale has to offer. But the rest is just nothing more than 08/15-ware without any form of surprise effects.

The worst thing about it is that the film is not really bad, but just average - and thus it is very inconsequential in the mass of similar genre films. Aside from the visuals of the house, there isn't one aspect that would justify buying a movie ticket - and that's coming from someone who really has a soft spot for this genre. If stale, off-the-shelf creepiness is enough for you, feel free to redeem yourself for a ticket to Winchester - The House of the Damned. To all other horror and scary movie fans, I strongly advise against wasting time and money on this weak little film. Only very conditionally worth seeing!

Cinema trailer for the movie "Winchester - The House of the Damned (USA/Australien 2017)"
Loading the player ...