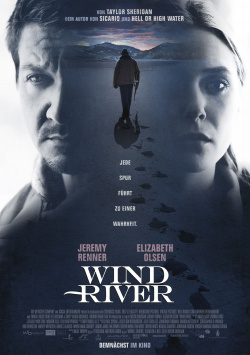 When tracker Cory Lambert (Jeremy Renner) finds the body of a young woman while hunting cougars on the snowy Wind River Indian Reservation, it brings back painful memories of his daughter, who was also murdered three years earlier. Young, fairly inexperienced FBI agent Jane Banner (Elizabeth Olsen) hires Cory, who is familiar with the area and its inhabitants, to help her investigate the murder. In doing so, they not only run into headwinds from the residents of the reservation, but soon realize that they are dealing with an enemy who will literally walk over dead bodies to cover his tracks.

Wind River is the gripping directorial debut of screenwriter Taylor Sheridan, who concludes what he calls his Frontier trilogy, which explores the modern American frontier. While Sicario focused on the violence on the U.S.-Mexico border, Hell or High Water focused on the ever-widening gap between rich and poor in West Texas. Now it concludes with the Indian reservations, which Sheridan calls America's greatest failure, forcing people to live on land that is too inhospitable and harsh for them to live a truly comfortable life. Rule of law plays the secondary role here, crime and murder are more commonplace than rare.

In this world, Cory tries to come to terms with his own personal tragedy as he is confronted with a case that further opens up his wounds that have not even come close to healing. He is thrust into a dilemma of whether to act on the viewpoints of justice or personal revenge. It is this dilemma that adds extreme tension to this very slowly told thriller. The combination of a rousing storyline, the oppressive atmosphere created by the intense imagery ensure that there is not even a moment of boredom.

At the latest, when Sherdian shows what happened to the dead girl, the viewer can absolutely understand Cory's dilemma. The very disturbing scene literally screams for retribution, but one's morals call for reflection. Who is stronger in the end? Cory's is shown to be, but it's also a question every viewer must ask themselves. As a result, the film also gains a certain sustainability, even if it's not quite as intense as it was in Sheridan's award-winning screenplay work for Sicario.

Who appreciates quiet but very intense thrillers with strong actors and a gripping imagery should definitely not miss Wind River. But if you need pace and plenty of action for a successful thriller, you'll probably leave the cinema rather disappointed - by an intense shootout. All in all quite clearly a: Absolutely worth seeing!