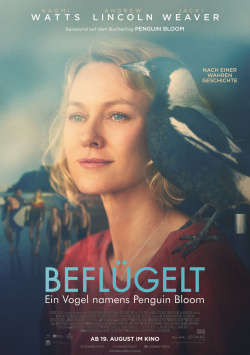 The Blooms are a real picture-perfect family. Mother Sam (Naomi Watts) and father Cameron (Andrew Lincoln) are as in love as the day they met, and with their three sons they enjoy life by the sea near Sydney. But a tragic accident takes away the family's light-heartedness: after a fall on holiday, Sam is confined to a wheelchair and seems to have lost all will to live. Cameron tries in vain to give her some joy and love - Sam just won't find her way back into life. But then one day son Noah brings home a small injured magpie, which he names Penguin. Sam is less than pleased about this - little does she know how much this little bird will help pave a path to a new life for her...

"Wings - A Bird Named Penguin Bloom" is based on the true story of the Bloom family and their very special relationship with the little female flutebird, Penguin. The bird succeeded in doing what Cameron Bloom and his sons failed to do: lift paraplegic Sam out of her depression. The former nurse went on to become a successful paracanut who also gained international fame through the family's Instagram account @penguinthemagpie. After Cameron published this particular story as a book, Naomi Watts secured the film rights, who went on to star in the film adaptation as well as produce.

The drama from Glendyn Ivin, one of Australia's most influential TV directors, boasts beautiful photography and strong acting from Watts and her co-stars. It's all in all very conventionally realised, but still manages to hit the audience right in the heart. The story - even if you don't know it yet - is rather lacking in surprises, but is full of hope and positive energy that it's very easy to get infected by it. After a rather somber beginning dominated by Sam's depression, Penguin brings an engaging lightness and joie de vivre to the film that you, as a viewer, can then feel even after the credits roll.

Surely: "Wings - A Bird Called Penguin Bloom" is not quite great cinema, not sophisticated cinematic art. But it is a drama that puts a smile on your face (and maybe a few tears in your eyes), that goes to the heart and makes you want to live. And that's exactly why it gets an absolutely deserved: worth seeing!