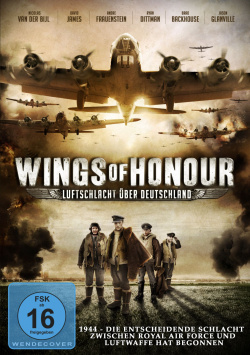 Content: September 1944: Captain Earl Kirk (Nicholas Van Der Bjil) just lost his best friend on a mission. And also the rest of his troop is extremely damaged and hardly operational. Nevertheless Kirk receives the order that his B-24 bomber squadron has to fly the next mission immediately. The target is a petrol depot near Bremen, which Kirk and his men are supposed to destroy and thus prevent the supply of fuel for German tanks. To support the Captain, a new co-pilot, Lieutenant Raymond Hawkins (Andre Feuerstein), will be assigned. But he doesn't seem to be much help, as he just graduated from flying school and is not very enthusiastic about flying as a Brit under a South African captain. But the tension between the two men is soon their least problem. Because the mission is a true suicide mission. Although Kirk and his squadron manage to withstand the bombardment of the German fighter planes long enough to drop the bomb on the fuel depot, the plane is so damaged that a return to the base is no longer possible. They have to make an emergency landing on enemy territory, which is just the beginning of the dangerous part of their mission...

With "Wings of Honour", the young South African director Christopher-Lee Dos Santos has staged a quite exciting war movie, which doesn't really break new ground, but which also offers some real suspense on familiar paths. However, the movie shot in and around Johannisburg suffers a little bit from its small budget in some moments. The air combat sequences sometimes look as if they were borrowed directly from a video game, and when Kirk's machine crashes, the computer effects show their particularly lean side. Also, the fact that actors were hired who have little or no experience in front of the camera is not necessarily one of the movie's strengths. Because a story like this needs strong actors. And no matter how hard the ensemble tries, their performances are really convincing, especially in the dramatic scenes.

The overall dramaturgy is quite poor in surprises and the historical accuracy also leaves something to be desired here and there. Apart from that, the desperate escape through the enemy war zone is not only ambitious, but also pleasantly excitingly staged. Even if you stumble across overused clichés as a viewer, it never gets really boring. But when it comes to pacing, the director could have gone a bit more balanced. While at the beginning he takes a bit too much time to build up the characters and the story, at the end he rushes too fast to the finale. So it takes just one minute until it comes from a seemingly hopeless situation to its resolution, which is then immediately followed by the credits. If a little of the time that was invested too much at the beginning had been put into this, the finale could have been much more powerful and convincing.

Admittedly, there is a hell of a lot that can be criticized about "Wings of Honour". Nevertheless, measured by the budget and the fact that this is only the director's second feature film, the film offers plenty of entertainment and enough excitement to earn a satisfied "worth seeing".

Picture + sound: The DVD's picture reveals the film's very low budget. Although the picture is clean and pleases with a decent sharpness. Nevertheless, the visual implementation can only compete with that of higher-budget films to a limited extent. Although director Dos Santos tries to get some opulent pictures, his work looks more like a TV production than a big movie. Of course, this doesn't change the fact that the picture leaves a really good impression on the DVD from a purely technical point of view. The same applies to the sound, which has a few powerful surround moments to offer during the air battles, especially with the German DTS mix. Good!

Fazit: "Wings of Honour - Battle of the Air over Germany" is a war movie that manages to build up some good moments of tension on a very small budget. Not all visual effects are convincing and the story is not exactly full of originality. Nevertheless, Christopher-Lee Dos Santos has succeeded in making a genre contribution worth seeing within the bounds of his possibilities. Those who don't measure the film against the great classics of war movies and can accept a few qualitative compromises will be offered 98 exciting minutes!