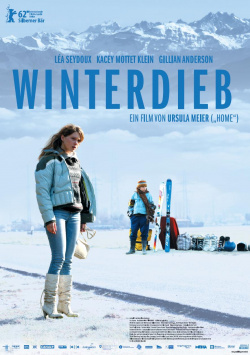 Twelve-year-old Simon (Kacey Mottet Klein) lives alone with his older sister Louise (Léa Seydoux) in a desolate block of flats in a dreary industrial area. Only a few hundred meters above the valley lies a noble ski area, where in winter day after day wealthy tourists enjoy snow, sun and luxury. To make a living for himself and Louise, Simon regularly takes the small cable car to the ski resort to steal the tourists' skis, equipment and bags. He then sells his loot among the other tenants in his block of flats. Simon drives very well with this trick and can even endure his sister after she has lost her job. But as his forays take on ever greater proportions, the boy becomes reckless and makes mistakes - with fatal consequences for the small house of cards that he and Louise have built around him…

With "Winterdieb" Ursula Meier presents the long-awaited successor to her award-winning "Home" from 2008. And also "Winterdieb" could already inspire on some festivals. The Silver Bear of the 2012 Berlinale is the highlight so far. With strong actors and quiet tones, Meier tells a moving and intense story, which at first glance is a pure social drama. As such, "winter thief" works extremely well. Simon's thefts in the luxurious ski resort are captivating, but sometimes also refreshingly amusingly staged, the contrasts between the picturesque tourist resort and the dull industrial area are captured in fascinating pictures and the complicated relationship between the boy and his older sister has a very special power due to the extremely good play of Kacey Mottet Klein and Léa Seydoux.

As with "Home", Meier manages very well to develop parallel worlds that could not be more different despite their spatial proximity. The problem with the drama is its very sad, almost depressing undertone. While "Home" had a pleasant and engaging lightness solely due to its rather bizarre starting position despite the dramatic story, "Winterdieb" is much more difficult overall. The story about a boy who gave up his childhood, who set up a criminal business to take care of his little family, is stirring in spite of the way the story is told, but also very hard stuff. Especially in those moments when Simon is surrounded by happy and - at least superficially seen - functioning families, the sad fate of the boy is really noticeable. And when in the end it becomes clear through his acquaintance with a wealthy Englishwoman ("X-Files" star Gillian Anderson) that Simon won't be able to escape this fate either, the film leaves behind a depressing and almost overwhelming feeling at the end, despite a minimal glimmer of hope.

Whoever appreciates sophisticated and silent Arthaus dramas should not be deterred by the seriousness of the story. Because the strong visual language and the even stronger play of the actors make "Winterdieb" a moving drama, which can be warmly recommended to all cinema lovers despite its smaller lengths and its sometimes bulky staging.