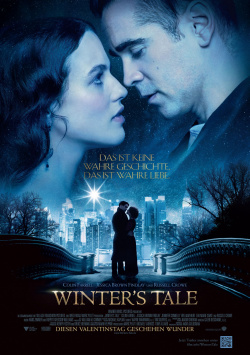 New York in 1916: small-time hood Peter Lake (Colin Farrell) is on the run from his former boss, gangster Pearly Soames (Russell Crowe). Accompanied by a white horse that has appeared out of nowhere as his unexpected protector, Peter plans to leave town for a while. On one last thieving spree through a seemingly abandoned house, Peter meets young Beverly Penn (Jessica Brown Findlay), with whom he immediately falls in love. Even when he learns that Beverly is gravely ill and will soon die, he wants to stay by her side as long as possible. It is the beginning of a great love affair that must stand against the forces of evil, against death, and against time - and that takes a surprising turn nearly a hundred years later.

Winter`s Tale is not based on Shakespeare`s play The Winter`s Tale, but on the 1983 novel Winter`s Tale by American Mark Helprin. Oscar-winning screenwriter Akiva Goldsman (A Beautiful Mind) has conjured up an enchanting cinematic fairy tale from this original, mixing a little fantasy with a lot of romance and a little too much kitsch to create a heartwarming whole. The eternal battle between good and evil, here fought out by demonic beings and heavenly protectors, is fought out in two time levels. First, Pearly Soames tries to prevent the love between Peter and Beverly in 1916. And in 2014, he does everything he can to prevent Peter from fulfilling his true destiny. It's a story where snarling hell-beasts meet flying horses, and where the immortality of great love can triumph over all evil.

Now, at first glance, this may not sound particularly promising. And indeed, some moments of the film shoot out to the unpleasant end of the sugar-coating scale. Especially towards the end it's just too much of a good thing in terms of romance and kitsch. Still, the fantastic love story works very well overall - provided, of course, that you accept that Winter`s Tale is a very classic fairy tale with a few modern components. Goldsman makes no compromises here either. He refrains from excessive realism and enjoyably celebrates the fairytale-like character of the original, especially in visual terms. This doesn't always work really convincingly, as the film simply lacks the necessary budget to get the necessary scale. But apart from a few small weaknesses, it is simply fun to be enchanted by this story.

That between the confidently acting Colin Farrell and the really charming playing Jessica Brown Findlay (Downton Abbey) actually the romantic sparks fly, is of course extremely helpful. Opposing her tenderness is Russel Crowe, who delivers the role of the demonic villain with great gusto. He does overdo it a bit here and there. Still, it's a lot of fun to watch him do his devilish thing. The same goes for the rest of the cast, with Oscar winner Jennifer Connelly being the only one who remains rather pale and clearly behind her potential. While William Hurt and Will Smith also don`t present top performances in their brief appearances, they ultimately deliver exactly what their roles demand of them.

It`s precisely in the second half of the film that the feeling arises that it would have done Winter`s Tale good if the story had been given more time and more size (read: money) to fully unfold. After all, what is meant to properly move the viewer in the 2014 storyline feels too rushed and perfunctory to be able to achieve that effect. The film is far from being really bad here, to be sure. But you just get the feeling that a lot of the book`s potential has been lost here.

Winter`s Tale is not a perfect film. In some scenes it`s even a little disappointing. But if you like imaginative fairy tales, great love stories and really a lot of kitsch, you will definitely get your heart pumping here, even in the weaker moments. Akiva Goldsman's cinematic directorial debut is a nice film to sit back and dream - nothing more, but also nothing less. And for that, with minimal point deductions, there is also an absolutely deserved: Worth seeing!