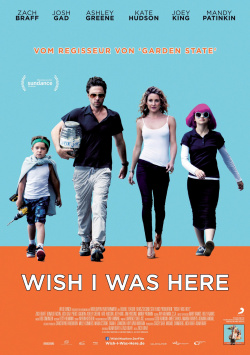 Wish I Was Here

It has always been Aidan's (Zach Braff) very big dream to one day become a successful actor. So far, his wife Sarah (Kate Hudson) has been fully supportive of him, earning the money for their little family while Aidan has been running from one audition to the next. But now that he's even auditioning for roles of African-American characters, Aidan has to admit to himself that his dream will probably never come true - just as his father (Mandy Patinkin) always predicted. When the latter becomes seriously ill and therefore can no longer pay for the expensive Jewish private school of Aidan's children Grace (Joey King) and Tucker (Pierce Gagnon), Aidan makes a radical decision: he wants to teach his children himself. When his first attempts fail miserably, his father's health deteriorates, and Aiden also realizes that his wife is really unhappy at her job, he realizes it's time to finally take responsibility - as a husband, as a father, and as a son.

Wish I Was Here is the second directorial effort from actor Zach Braff (Scrubs) following his acclaimed debut Garden State. Braff used a Kickstarter campaign to raise funding for the project, which he wanted to make completely without the influence of a major studio. The result is a charming tragicomedy that scores with many wonderful moments and a great ensemble of actors. Braff succeeds very well in weaving light humor and moving drama into a coherent whole. As a viewer, you may laugh heartily or smile delightedly in some places, is then again almost moved to tears in other moments.

Inhaltlich offers the story, especially with regard to the illness of Aidan's father not necessarily light fare. But Braff does an excellent job of avoiding letting his film degenerate into dreary consternation cinema or an overly sentimental sob story. Whenever the whole thing is in danger of becoming too corny, Braff pulls the emergency brake in time and changes the tone. So then small tears or a lump in the throat can be easily suppressed with a relieving laugh.

In this way, the film deals with quite essential topics such as family, marriage, growing up and death. Without ever getting too superficial, Braff manages to present all of this as light, life-affirming entertainment. And that can justifiably be called a minor feat. The former series star also does a great job as the lead and puts on a really likable performance. The same goes for his film wife Kate Hudson, who acts pleasantly reserved here, and for his film children Joey King and Pierce Gagnon. And even in smaller supporting roles, familiar faces show up, like Braff's buddy Donald Faison (Scrubs) or Jim Sheldon Cooper Parsons, who was also in Garden State. But Mandy Patinkin (Homeland) makes a special impression, providing some real goosebump moments as a dying father.

Wish I Was Here is a truly charming film that proves definitively that Zach Braff is a truly talented filmmaker. As with Garden State, he doesn't reinvent the wheel here, offering no quite cinematic revelation or groundbreaking masterpiece. Rather, he gives his viewers just under a hundred minutes of pure feel-good cinema with likeable characters, nice gags and some heartfelt moments. He tells a touching and funny story that leaves the audience with a big smile on their face and a little tear in their eye. And for that, Wish I Was Here clearly deserves an Absolutely Worth Seeing!