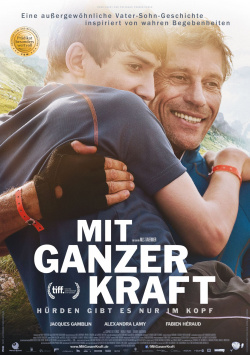 Although 17-year-old Julien (Fabien H&eacute;raud) has been disabled since birth and is confined to a wheelchair, he has never stopped dreaming. He dreams of having exciting adventures and also of finding a loving girlfriend. But there is one thing Julien wants more than anything else: He wants to finally have a closer relationship with his aloof father, Paul (Jacques Gamblin). But when he loses his job, he finally distances himself from his wife Claire (Alexandra Lamy) and from Julien. When the boy finds out that Paul used to be a passionate athlete and even took part in the Ironman triathlon, he gets an idea: he wants to take part in the next Ironman together with his father. His father doesn't really take the whole thing seriously at first, but is then so impressed by his son's persistence that he agrees to train with Julien for the triathlon. Father and son have no idea that building the right sports equipment is the least of their obstacles.

With All My Might was inspired by the true story of an American family whose son has suffered from Infantile Cerebral Palsy since birth, but to date has competed with his father in more than 1,000 running and triathlon events, including four times in the infamous Ironman Hawaii. This story served director Nils Tavernier as the basis for a very nice father-son drama. Great actors, beautiful imagery and of course the moving plot make this basically really worth watching. However, Tavernier's staging follows a little too closely the predefined paths of such inspiring everyday hero films, in which the overcoming of limits, especially in sporting terms, allows new life perspectives.

So the plot follows a very clear pattern, without really exploiting the potential that offers the difficult father-son relationship. The conflict, which is established very well at the beginning, resolves too quickly, leaving too little time for the viewer to really get emotionally involved with the characters. There's no question, especially the last third is very rousing staged and the actors are quite great. There are also many wonderful scenes, such as the one in which Julien fights on his own to be admitted to the Ironman or a sequence that shows how Paul's worries slowly give way to pure joy of life and love for his son. But it's moments like these that show that much more could have been brought out here.

So With All Your Might is a nice, charming film, but nothing more. But since Tavernier succeeds in transferring a very life-affirming feeling to the audience and his film can definitely give courage, there is despite the all too conventional production at the bottom line still a very clear: Worth seeing!