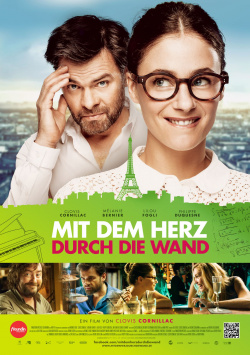 With the heart through the wall

A young inventor (Clovis Cornillac) loves silence and solitude and hates other people for it. So far, he has always managed to drive away any potential neighbor in the very brightly sounding apartment next door. But the new resident, a young pianist (M&eacute;lanie Bernier) he grits his teeth. The only thing that helps is to bring out the heavy guns. But just when the two have nearly driven each other mad, they realize they don't really dislike each other. And slowly, through the wall, a tender friendship develops that could actually turn into love. The only question is: is the wall between them an obstacle or does it protect them from reality?

With the Heart Through the Wall admittedly doesn't reinvent the wheel. Nor is it the first romance where the lovers don't get to see each other for most of the film. Nevertheless, director and leading actor Clovis Cornillac succeeded in making a very charming romantic comedy, which besides some clichés also has some pleasantly original ideas to offer. The way in which the two neighbors try to drive each other crazy is just as amusing as the cooking together on the first date. It's moments like these that allow the film to play to its strengths, offering its audience delightfully light comedy fare of the typical French kind.

There are, however, some scenes that come across as a little too hysterical or flat. They tarnish the fun a bit, though this is only very marginal in the end. The loose production, the characters with all their quirks yet very lovable and a good portion of heart comfort over most weaknesses. Of course, that doesn't make the romance a masterpiece by any means. The whole thing is just too banal for that. That may sound very negative now. But Cornillac himself seems to know that he didn't create a highbrow art cinema, but just light entertainment fare. And since his production never tries to be more than it actually is, let banal here also be understood in a rather positive sense.

With the heart through the wall is perfect fare to turn off your brain and just let yourself be nicely sprinkled while also getting something for the heart. A film for an amused permanent smile, which should stay especially lovers of light French romances for a while after the credits. And for that, despite some weaknesses and lack of depth, there is a very clear: Worth seeing!

Cinema trailer for the movie "With the heart through the wall (Frankreich 2015)"
Loading the player ...