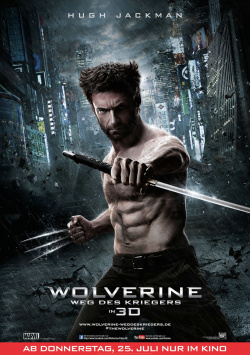 Wolverine: Way of the Warrior

Wolverine, arguably the most popular X-Men, returns to theaters with his second solo outing. After his first cinematic solo outing turned out to be rather disappointing, he is now breaking completely new ground in his second attempt. Under the guidance of director James Mangold (Walk the Line, Death Train to Yuma), Logan (Hugh Jackman) heads to Japan, where he hasn't been since World War II. Shingen Yashida (Hiroyuki Sanada), the man Logan saved the life of during World War II, is dying and wishes to say goodbye to his savior in person. Reluctantly, Logan, still suffering from the death of Jean Grey (Famke Janssen), accepts the invitation. However, shortly after his arrival, Yashida passes away, transferring his entire business empire to his daughter Mariko (Tao Okamoto). This puts the young woman in the sights of the Yakuza, who make an attempt on Mariko's life while she is still at her father's funeral. Naturally, Logan, as Wolverine, rushes to the rescue. But although he manages to rescue Mariko and bring her to safety, the danger is far from over. For behind the attack on Mariko are forces far more powerful and dangerous than first appears.

Wolverine: Way of the Warrior is a big step in the right direction. The film was inspired by a four-volume comic book series penned by Chris Claremont and Frank Miller, in which Wolverine must fight all manner of crime and deceit in Japan. What's interesting about this premise is that it's very different from what's been seen so far from the X-Men universe. It centers on an internally broken hero who desires death, and comes especially close to that desire when he so doesn't need it. Logan doesn't just clash with a particularly nasty mutant (Svetlana Khodchenkova) and extremely persistent Yakuza warriors here. The toughest battle he has to fight is with himself. Since James Mangold takes an astonishing amount of time to clarify this inner struggle culminating in a death wish, this second Wolverine outing is much more interesting than its predecessor, if only from a purely dramaturgical point of view.

That's not to say, of course, that the film has become too dialogue-heavy a self-discovery drama. There are quite a few fast-paced action scenes, as well as fantastical elements that should more than satisfy fans of gritty comic book adaptations. Still, Wolverine: Way of the Warrior is much more character-driven, especially when compared to other recent comic book adaptations such as Iron Man 3 or Avengers. It may be that viewers who expect non-stop action will be bothered by the many quiet moments and even find the film boring in places. But if you were hoping for a little more substance after the rather flat first film, you'll definitely get it here.

What the film can convince with first and foremost, however, is its look. The set and special effects are great and give the story a gritty, very special atmosphere that easily makes up for some of the minor lengths. Mangold has done a first-rate job of creating a balanced mix of visual bombast cinema and quieter fantasy drama that actually manages to bring a little something new to the familiar character of Wolverine. However, this doesn't make Wolverine: Way of the Warrior perfect. Despite its own style, the movie doesn't seem very innovative. Many of the plot twists are predictable long in advance and the dialogues are full of clichéd phrases. The biggest drawback, however, is that Logan's self-doubt doesn't only make him lose cool. The fun factor has also been significantly reduced compared to previous big screen appearances of the steel-clawed mutant. Sure, Logan is still the coolest of all X-Men thanks to the as always good performance of Hugh Jackman and here and there a few little laughs break through the gloomy cloak that hangs around the story. Nevertheless, this Wolverine lacks a bit of the sarcastic bite that has made him so far.

But these are admittedly only minor criticisms of an overall very good fantasy action cracker, which reaches its real climax but only in the end credits. For here there is a segue to the next X-Men movie, which will hit theaters in 2014. This little appetizer is a bit of a feast for fans of the franchise, and sends them out of the theater with great anticipation. But until that happens, fans will have to make do with Wolverine: Way of the Warrior. It's not quite the Wolverine movie they wanted, but it's pretty darn close despite some minor flaws. And for that it gets a well-deserved: Absolutely worth seeing!

Cinema trailer for the movie "Wolverine: Way of the Warrior (USA 2013)"
Loading the player ...